Phew, this week has been full of F~U~N!  It started with our return to Beaufort, NC.  We really love this little town. The people are so welcoming and we have such fond memories from our first visit in July.

Other than the usual, provision, clean the decks, walk the town and eat in restaurants, we took a ghost tour!

Seeing as how Beaufort is proud of its’ pirate history and it was very close to Halloween, we thought a ghost tour would be a perfect way to learn some history and hear some scary stories. 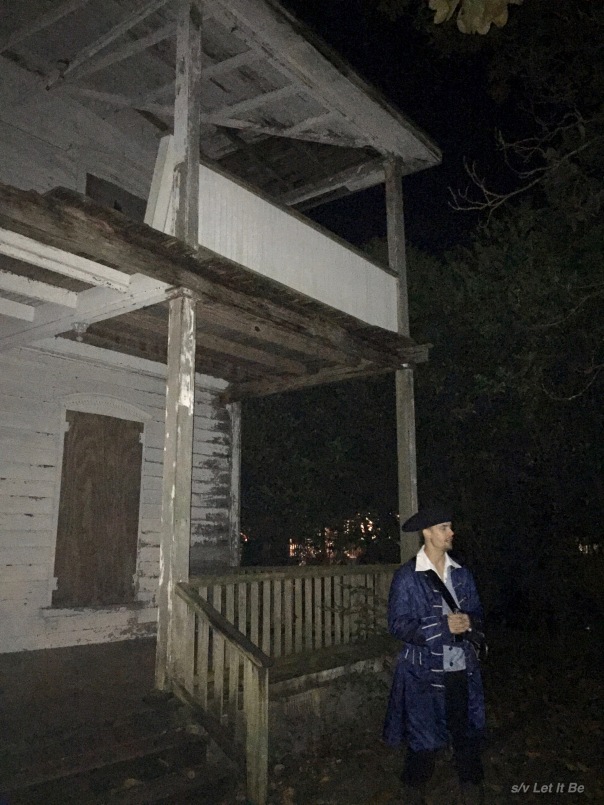 We signed up for the Beaufort Ghost Walk 7:30 pm tour. Our guide, Jacob, was an excellent story teller who wove history and pirates and fear into an entertaining 70 minute walk through the oldest parts of Beaufort.  I highly recommend this tour if you are up for a bit of walking and history. 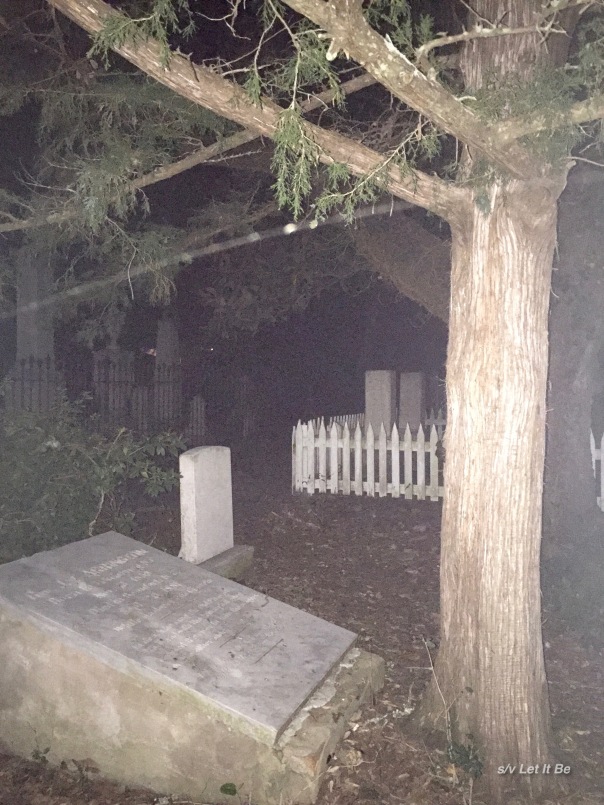 On our motor to Beaufort, we noticed our steering had a bit of extra vibration in it, so Frank dove in and checked things out. Glad he did because our port rudder was 40 degrees different from the starboard rudder.  It appears the set screws for the port side rudder were completely stripped off and our rudder was not working properly! 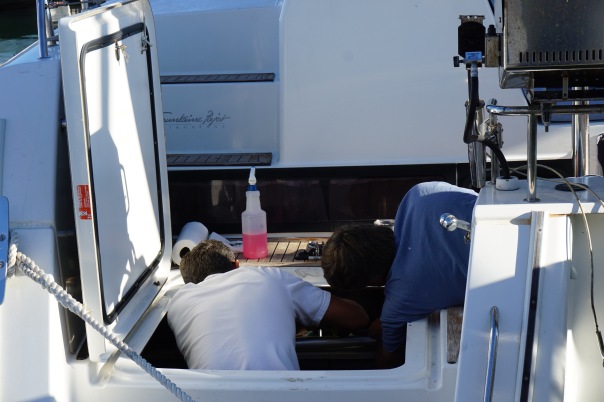 After diagnosing the problem and securing parts, Frank and Bill, of s/v Our Log, went to work fixing the rudder.  Together they through bolted the tiller arm to the rudder post. 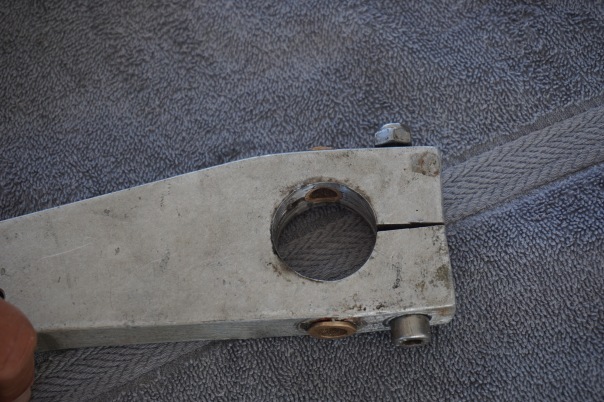 Our rudders are now in alignment and the port rudder connection is much sturdier and steering and docking are MUCH easier! 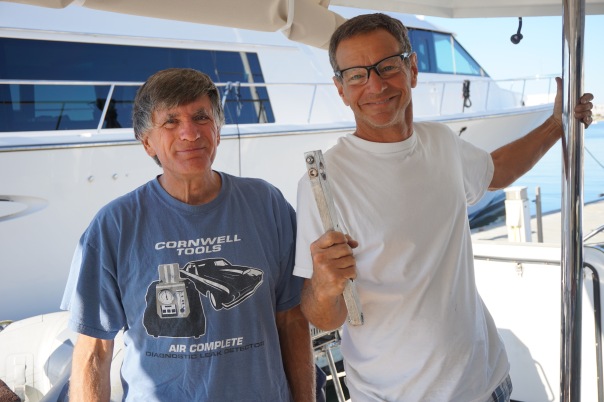 Bill and Frank with the rudder arm repaired.

Thank you a ton, Bill, for sharing your expertise and time with us.  I know Frank appreciated talking with you about the repair as I was no help and you are so knowledgable! 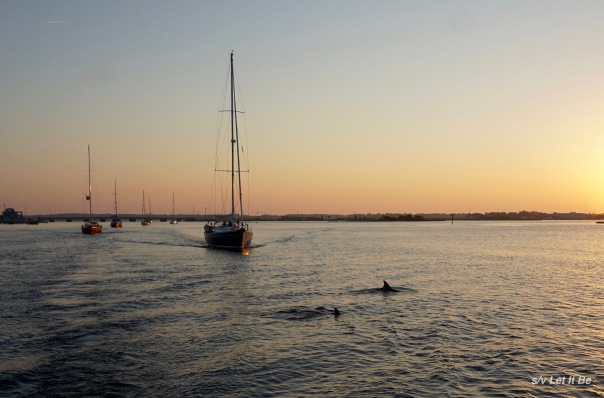 On the morning of Halloween, we left Swansboro, NC very early. Our reward was seeing these dolphins playing in our wake!

Frank and I got into the swing of Halloween and sported our costumes most of the day. 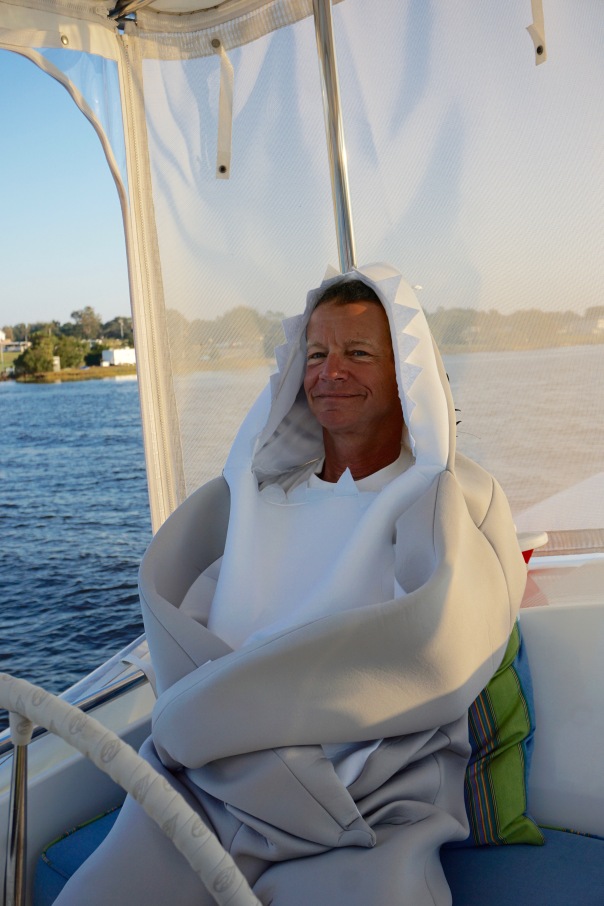 There was quite the traffic jam at one of the bridges so we offered to move ahead and lead the way since we have such low clearance without our mast. 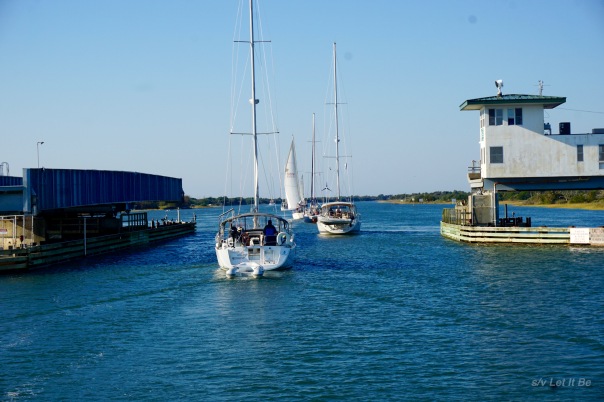 Unfortunately we did not hear the warning about a shoal near one of the markers and LIB ran aground!  Yep, happy halloween to us ~ we get to join the “we have run aground” club! 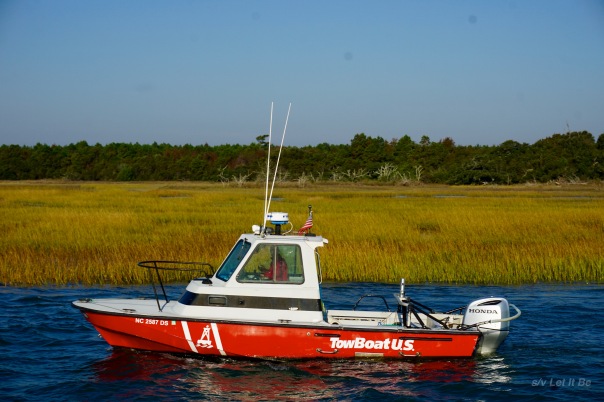 I am quite certain the TowBoat U.S. driver thought we had been drinking when he saw Frank standing on the deck in his shark costume!

Thank God we didn’t have any damage to LIB and Steve, the TowBoat driver, was able to free LIB from the shoal. 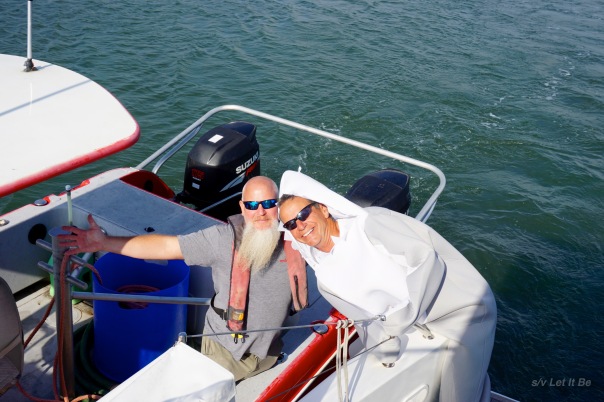 Thanks for the help, Steve!

On Halloween evening we met up with Mindy and Ron of s/v Follow Me for some ‘reverse trick or treating.’  Essentially this meant we gathered our goodies, jumped in our dinghy and visited boats in the anchorage to deliver treats!  Our candy was appreciated but the mini shots Ron and Mindy dispensed were very well received. 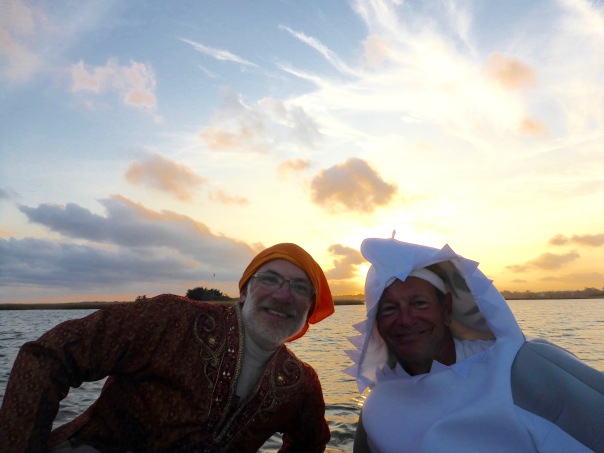 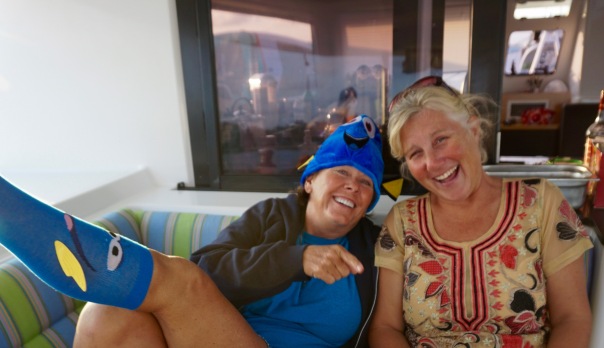 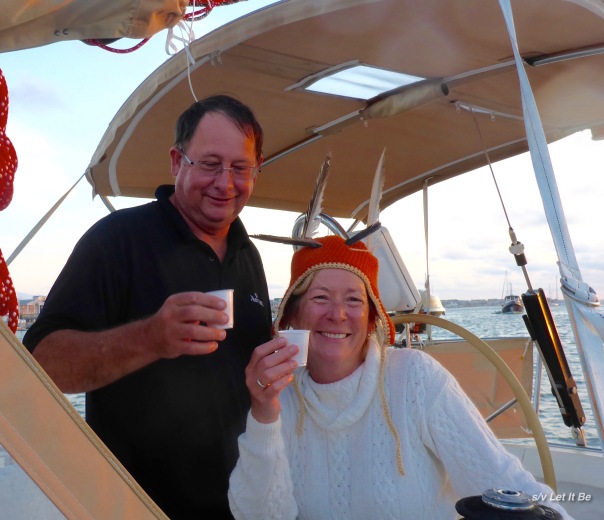 We saw “snowbirds” Susan and Kevin on s/v Radiance.

The ICW is a thousand mile display of variety.  Each day we see changes in vegetation that can be anything from low lying marsh grass to towering bald cypress trees decorated with Spanish moss.  We see small towns, wildlife preserves and prosperous cities.  The variety keeps the travel interesting as we navigate.

The navigation itself is very different from our ocean experience because the water is shallow and the traffic is greater.   I find reading the water difficult because there are no depth hints based on the color of the water and the water is not clear.  The land signals I am accustomed to, such as deeper water near sharp banks, do not exist either.  How am I supposed to know which side of a canal is deeper when both sides look alike?

The upside is that eventually I will get much better at reading charts and daymarkers, but for now I rely heavily on Frank for guidance.

Here are some photo highlights from this week… 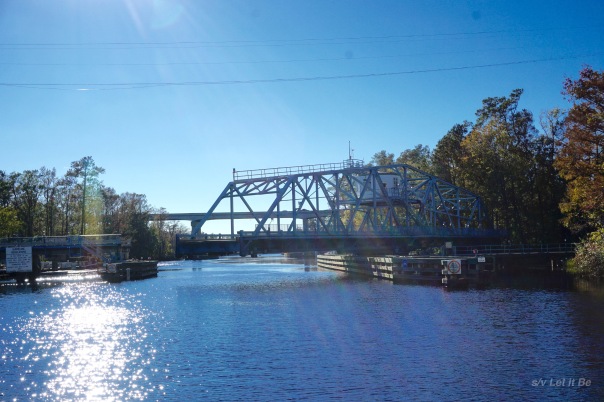 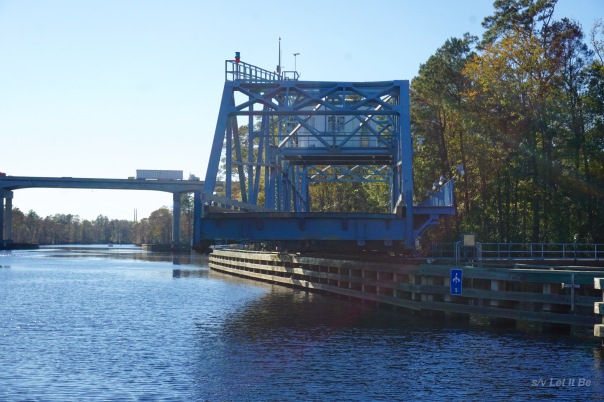 Almost all the way open. 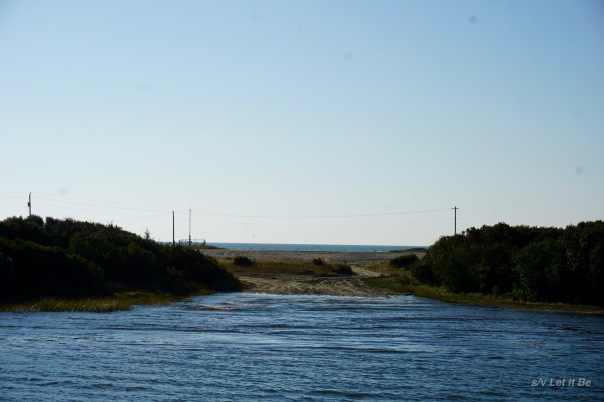 Only this small strip of land separated the ICW and the Atlantic Ocean. 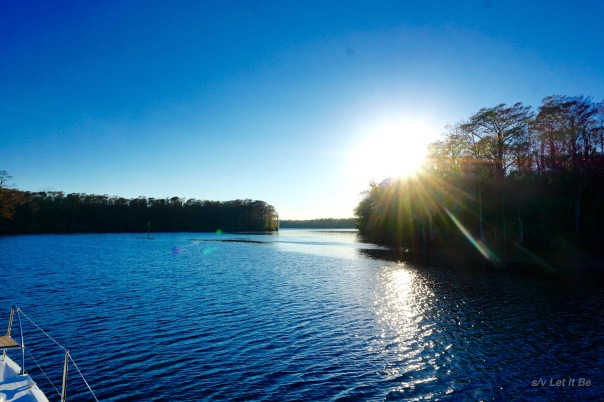 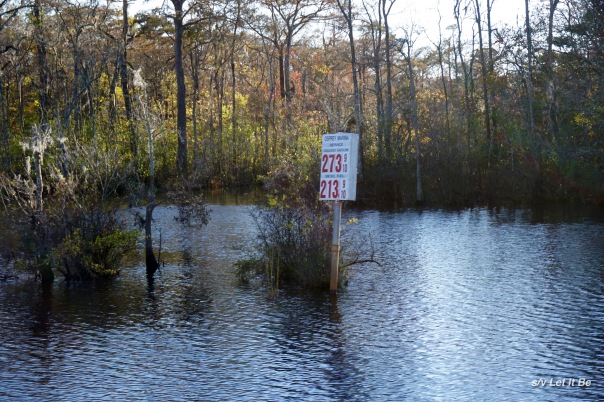 Nope this area isn’t flooded, it’s the fuel sign at the entry to Osprey Marina!

Did MaryKay relocate to the ICW? 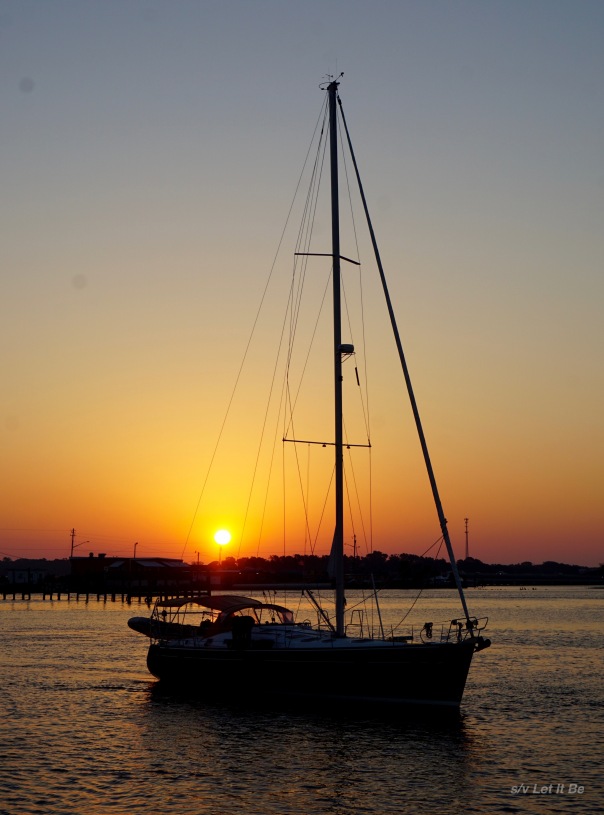 Of course I’ve included one sunset. 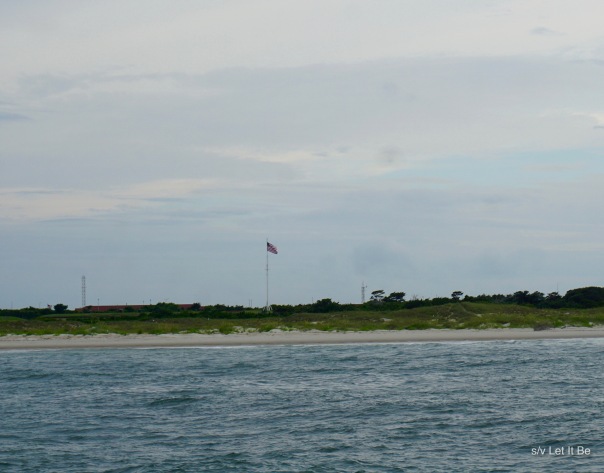 Old Glory was a welcome sight.

The picture isn’t very good, but the sight of the American Flag flying at Fort Macon by the Beaufort Inlet, N.C. was a grand welcome to the end of our crossing from the Bahamas to the U.S.

We have been out of U.S. territory for six months and off of the mainland for almost nine months. I was ready to be “home.” The contrast of Beaufort and the Caribbean is stark. That is not to say one is “better” than the other, but being back in our home country and enjoying the culture we grew up with is certainly agreeable!

Arriving for the Independence Holiday weekend accentuated the patriotic feeling of our return and gave us the chance to truly celebrate being American. 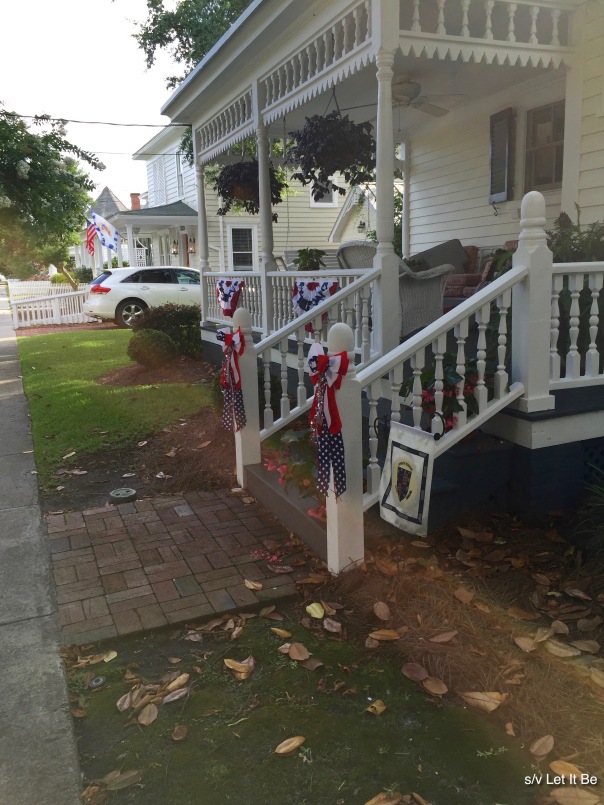 Beaufort is a darling town that feels almost Mayberry-esque.  For those too young to understand this reference, it feels old fashioned; it feels small town; and being American is a statement of pride. 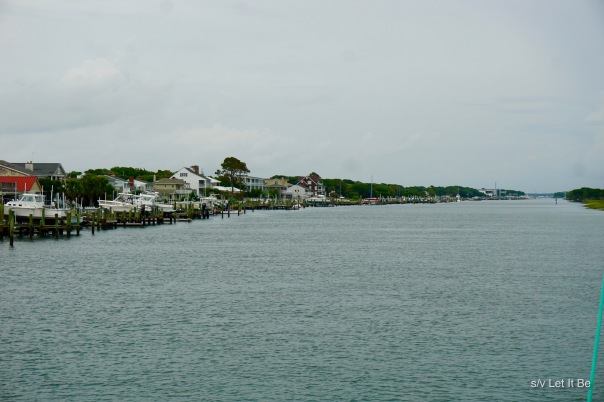 The homes along Taylor Creek are very well maintained and the creek is a busy boating lane. Although we saw some very nice homes scattered throughout the Caribbean, the equitable, manicured waterfront and neighborhood homes here in Beaufort were a pleasant change.

We chose to rent a slip at the Beaufort City Docks and the experience has been excellent. The folks here are incredibly nice and very accommodating. In addition to great slips, free wifi, free water and consistently available electricity, Beaufort City Docks offers a free loaner car which we happily borrowed for provisioning. 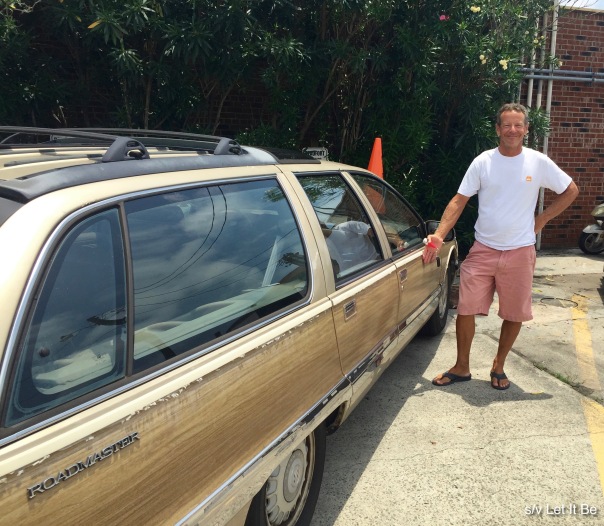 I felt like I was 12 years old again riding around in this old station wagon. I wanted to sit on the tailgate while Frank was driving like we used to do when we were young….but I’m quite certain we would have received a few tickets for that!

I had friends tell me that when we got back to the States and went to the grocery we would be overwhelmed. I wouldn’t say we were overwhelmed, but we bought WAY more than usual because we were so happy to find such rarities as seedless grapes, cherries, peaches and other fruits and veggies.  The plethora of options was delightful and hard to resist!

We Americans are spoiled by the plenty – and I kind of like it.

The neighboring boaters here are amazingly friendly. We have visited with many people and marvel at how open everyone seems.  One couple, Sue and Michael, had stopped on the docks for a few minutes before heading out to Carrot Island to meet friends. They kindly invited us to meet them, so we packed some snacks, grabbed Captain and headed over in Day Tripper.

Wow, boat picnic-ing is a popular activity for the 4th of July weekend! Just for fun we scouted out the scene before meeting Sue, Mike and their friends. We have not had to deal with tides and currents while sailing the Caribbean, so it has been interesting to see how the locals use those tides to their advantage. When the tide goes out, several sand bars appear and these become day stops/party spots for local boaters. 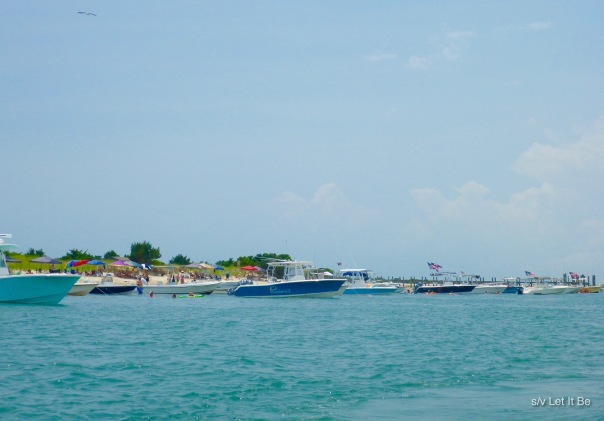 One small section of day boaters and a lot of flags.

We completely enjoyed hanging on the beach with our new friends and hope to meet up with them later in the year when we begin working our way down the ICW. They will be back from their Caribbean charter and we want to hear all about it.

As one would expect of a patriotic small town, there was a July 4th parade. I loved watching the locals call out greetings from the sidelines to paraders. 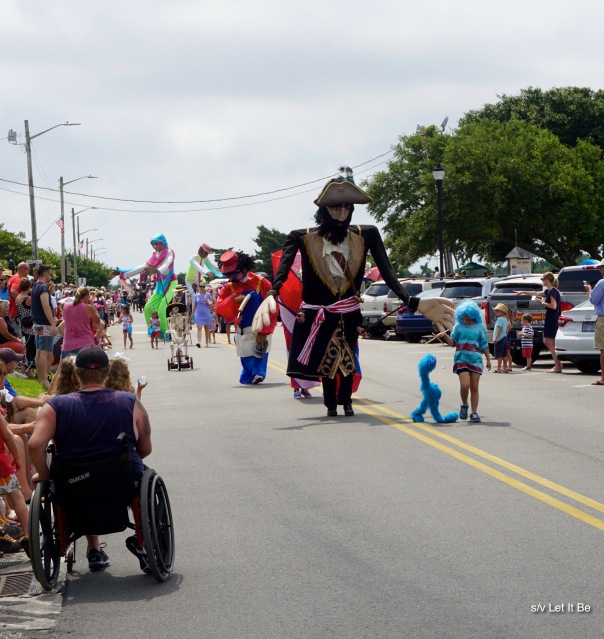 Pirates are big in Beaufort.

The wreck of Blackbeard’s ship was found near the entrance to Beaufort Inlet, so pirates play a major part in Beaufort celebrations and themes. 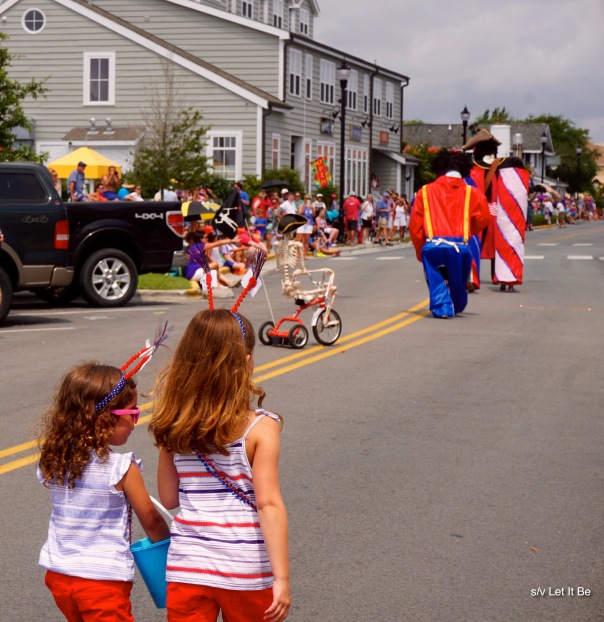 Captain did not appreciate the large costumes or the skeleton on the bike!

I loved seeing these sweet, little kids jabbering away as they walked behind the large form of the pirate and the skeleton riding a tricycle. If you look, you can see two firecrackers walking down the street in front of the big pirate. 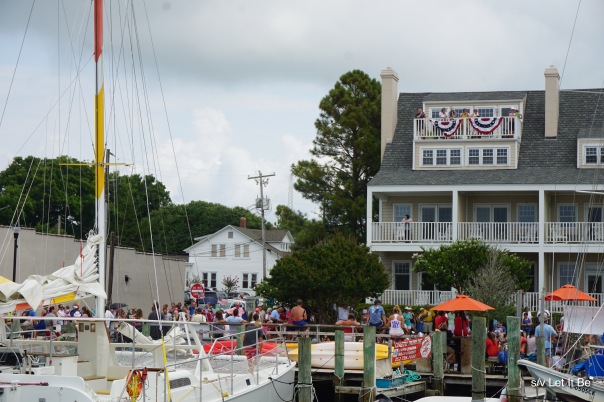 Main Street (Front Street) is right off the docks.

Beaufort also is home to Shackleford Island where wild horses still roam today. This sanctuary is directly across Taylor Creek from our bow. Wild ponies roam the island undisturbed, eating the tender grass and drinking from fresh water lakes. 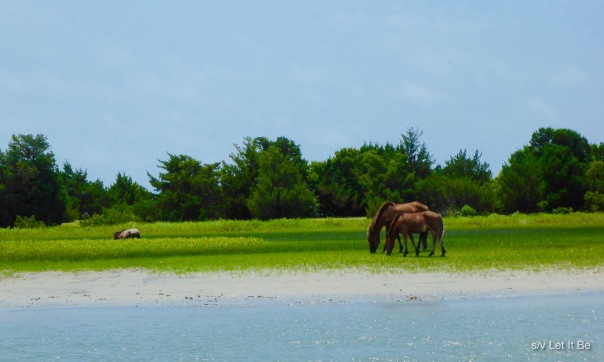 A younger me would have tried to catch and tame one of these horses.

Frank and I toured Beaufort on our bikes. We had a great time coasting around without a bit of worry about traffic or road rage. The spokes on Frank’s wheel seem to be having issues as a couple of them broke. But my super handy hubby knows how to fix a broken spoke if he has spare spokes. Beaufort Bikes to the rescue! 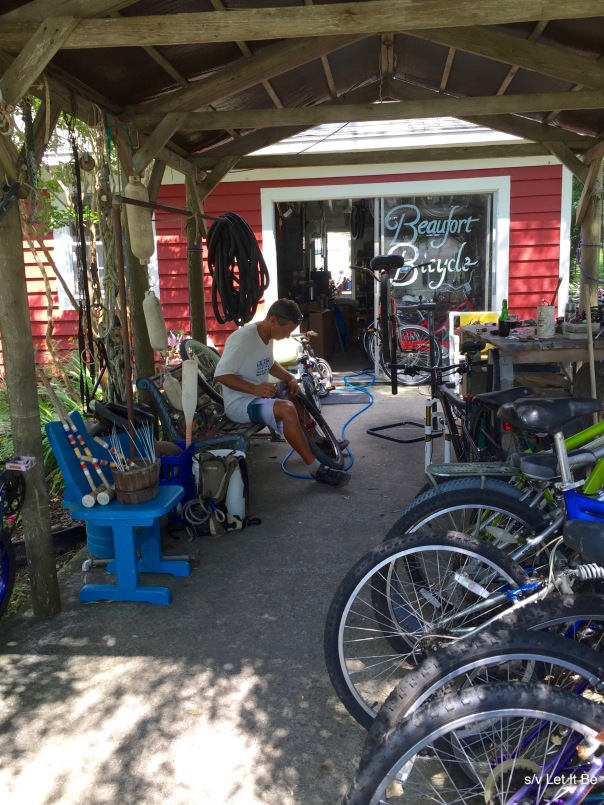 Steve, the owner of Beaufort Bicycles, arrived here over a decade ago in a boat. He was thinking about returning to land and found the people in Beaufort the nicest he had every encountered. So, he bought a house, set up a bike business and has been here every since.  He is a great guy and if you need anything while visiting Beaufort, he will happily help.

Recently Linda and Kevin contacted us via this blog and shared with us their love of sailing and told us they are buying a Helia! One conversation led to another which eventually led to them agreeing to drive to Beaufort to share drinks and dinner with us. Linda and I hit it off immediately and not long into our conversation, we realized we both grew up in St. Louis, MO. Then things got really weird…. turns out, Linda and I both graduated from the same all girls, Catholic high school! (Though she is TEN years younger than I am.)  YEP, low and behold, we two St. Joseph’s Academy grads have found each other through sailing.  What are the chances?! 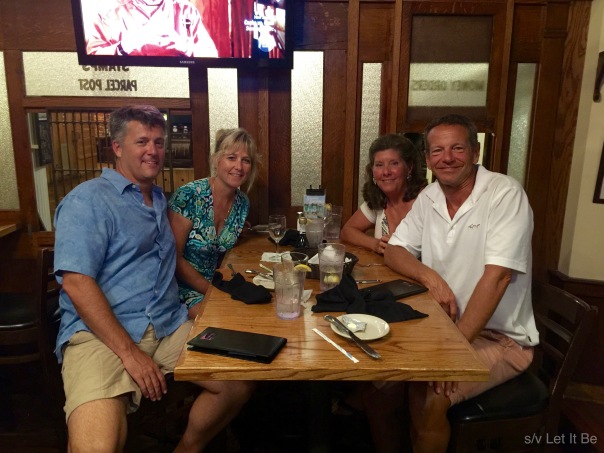 If you are interested in chartering a brand new Helia, Counting Stars will be available this fall!

I write this blog primarily because I enjoy it but also so we will have a journal of some sort whenever this adventure concludes. I have learned from my past that I am not a ‘scrapbooker’ and I stink at putting together paper journals. This electronic medium is a bit time consuming when we have slow internet, but I like to think that if someone is interested in the cruising lifestyle, they can get a little feel for it from our blog. Finally, I write so our family has an idea of what we are doing and where we are.

I never imagined that other people might reach out and contact us because of something they had read in this blog.  I am very flattered just knowing that someone is reading what I have written and I am thrilled that we have actually met a few people because of this blog.

SO, if you have the inclination, we would very much like to hear from our “readers out there.” You are welcome to ask questions about sailing, our boat or whatever piques your curiosity.

Before I get this question several times over….. yes, Captain does go to the bathroom on the boat. We have a piece of astro turf she uses – but she doesn’t like it and much prefers real ground!

Thanks for reading! We would love to hear from you…