Wow, sorry for the delay, but it’s been super busy here! Not only are we moving fast, but Frank’s mom, Jackie, came to visit.  I have not had time to write!

Here is the quick version: 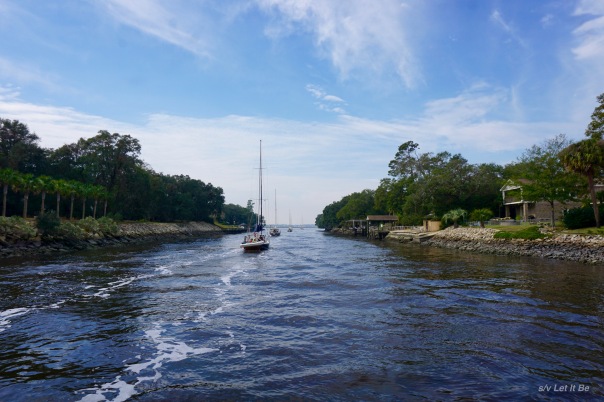 Our trip from Charleston to Beaufort was very pretty.  This section of the ICW included narrow cuts, lined by houses as well as open marsh areas.  Apparently the weather is great for many kinds of trees and plants because we saw a variety.

As soon as we arrived in Beaufort, we took a carriage tour through the town.  The guide was excellent and we learned about the history of the town and some of the famous folks who lived there or passed through.

We learned about the “Great Skedaddle,” which occurred at the beginning of the civil war.  Union troops were sent to take over Beaufort as it was a strategic port, but the citizens did not want to accept occupation, so the town skidaddled before the troops arrived.  When Union soldiers steamed into port, they found a beautiful southern town that was completely deserted.  Beaufort was taken without a single shot being fired.  No war damage was inflicted on the structures so many beautiful, historic buildings still exist.

Beaufort is also one of the major sites used in filming “Forrest Gump.”  There were several cute stories about Tom Hanks and his time in the town and the location of some of the scenes.

We strongly recommend a tour if you visit Beaufort.

Hilton Head Island was our next stop.  The rest of the rally stayed in a beautiful marina that was accessed using a lock.  LIB’s beam is greater than the width of the lock, so we stayed in a different marina called Skull Creek.  Despite the name, this was a very pretty place.  Skull Creek Marina is within the Hilton Head Plantation gated community which is a huge development of homes, parks, golf courses, etc.  We had a fabulous time exploring the area on our bikes.

South Carolina has a very large tidal range.  Using photographs, Skull Creek was a great place to demonstrate how much difference the tide makes … 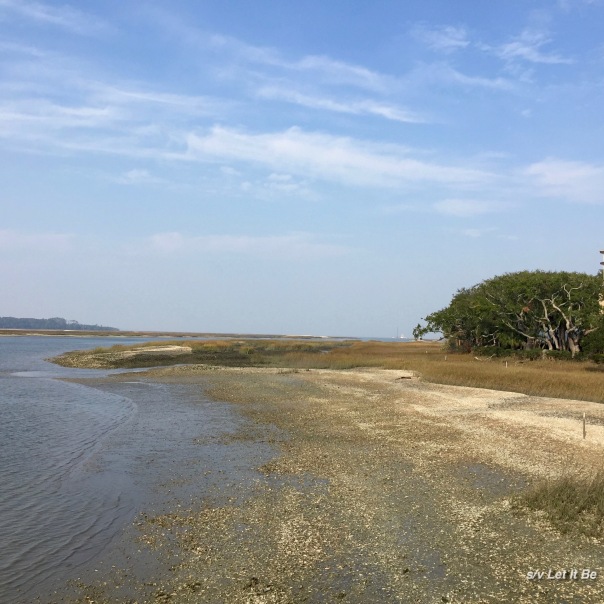 The same area at low tide.

Here are a few pretty views from South Carolina. 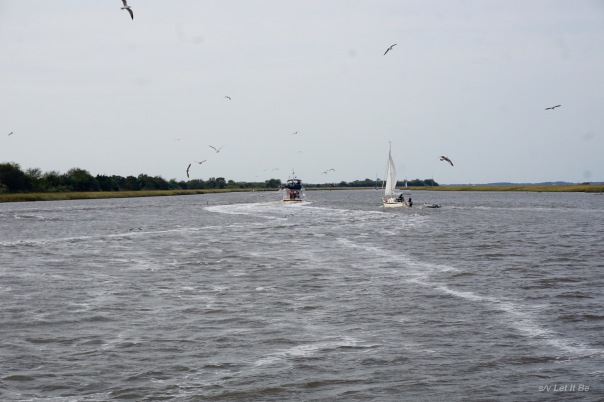 A different scene on the ICW

This boat was anchoring right near us when the dolphins arrived.

(Sorry about the blurry pic…)

TINY FACTOID:   Spanish Moss absorbs food and water through its’ leaves from the air.  It does not damage the host tree although sometimes the moss becomes so thick, the shade it creates on the tree may slow the tree’s growth rate.

Also, Spanish moss was often used as mattress stuffing but it must be properly prepared (boiled and such) because chiggers and other bugs live in the moss.  One story we heard is that Spanish moss was the cause of the first ever recall in the automotive industry.  It seems Henry Ford used Spanish moss in the seats of early Ford cars and urban legend has it that the moss seats had bug troubles!

I have not been able to verify this, but it’s kinda funny.