Balloons, Birds, Turtles and Us

Who doesn’t love balloons? They represent so many positive and happy occasions from the birth of babies to birthday parties, carnivals, weddings, car sales and so many other important or pleasant events. 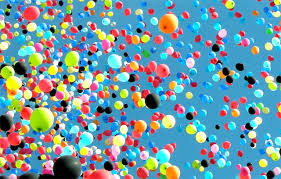 But there is another side to balloons; one that is forgotten or never even considered….. thousands and thousands of balloons end up escaping.  Is there a secret party “out there” where all escaped balloons meet and party? No. It isn’t that pretty.

Picture the darling little 4 year old, playing with a balloon, laughing and joyous over such a simple toy. Then the balloon escapes, up it flies out of reach and the child cries, heartbroken.

Understandably, the parent spends his or her time comforting the child and the balloon is long forgotten.

But the balloon now seeks its own life’s path floating higher and further as the wind carries it along an unknown route. After a beautiful, carefree flight of perhaps hundreds of miles, the balloon slowly looses air and begins it’s descent wherever it is blown.

A sad end that is actually the beginning of tragedy because now that faded, deflated balloon with it’s bright colored ribbon still attached is about to begin a one balloon death campaign.

Perhaps the bright color will fool an unsuspecting sea turtle that will eat the balloon thinking it is food. 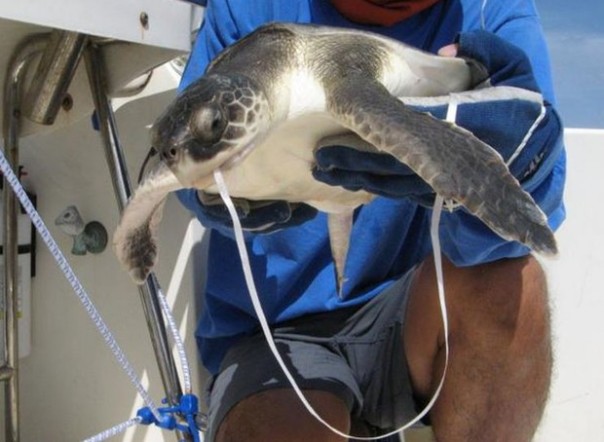 Perhaps the turtle is smart enough to realize the balloon is plastic and not food, but in it’s curiosity it swims around the balloon and becomes entangled in the brightly colored string. Soon its movement is restricted and it can no longer swim. 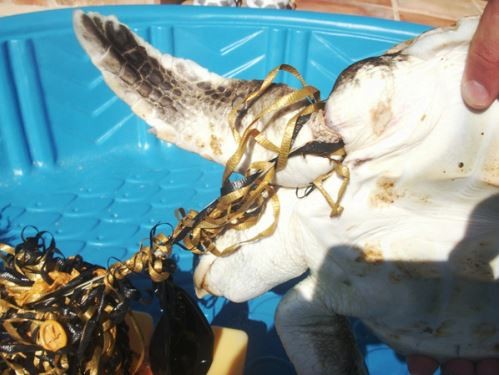 These two simple examples will result in the eventual starvation of one turtle and the death of the other as well.

Dolphins, whales and seals have all been found with balloons and other plastics in their stomachs. See this short article by John Metcalfe for additional information and links about balloons in the oceans and on the shores.

Actually, you might be surprised just how many birds, turtles, fish etc end up dying as a result of balloons, strings, fishing lines and other waste that someone simply didn’t recognize as a death trap.

Of course, this was not intentional.  A 4 year old has no idea her balloon could cause such havoc.  But we, the adults, need to raise our awareness.

I am not advocating that you stop celebrating! I love to celebrate, but next time, perhaps alternatives to balloons can be used. 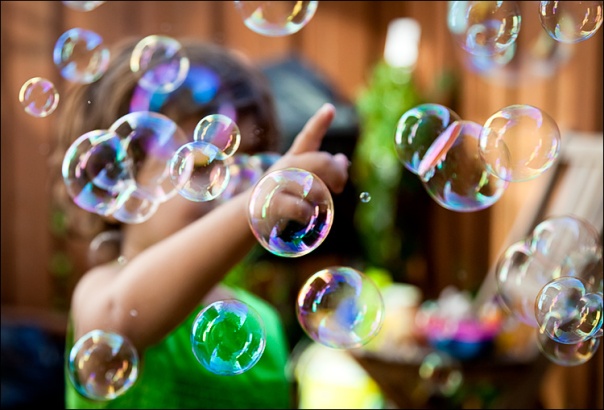 Bubbles are pretty and fun to pop. 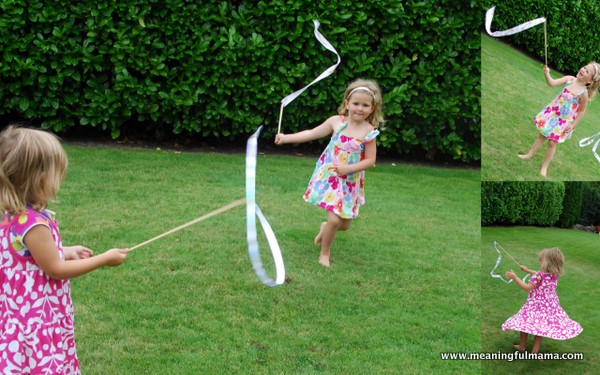 Or perhaps you could have ribbon streamers on wands – they are engaging and make beautiful dances as children and adults wave them around.

This article Environmentally-Friendly offers many alternatives to balloons.

I’m not posting horrific pictures of dead birds or turtles in this blog, but I am asking that you help increase awareness of your own choices and perhaps share your decisions with others.

We left St. Martin and had a quick and easy motor sail to St. Barts. 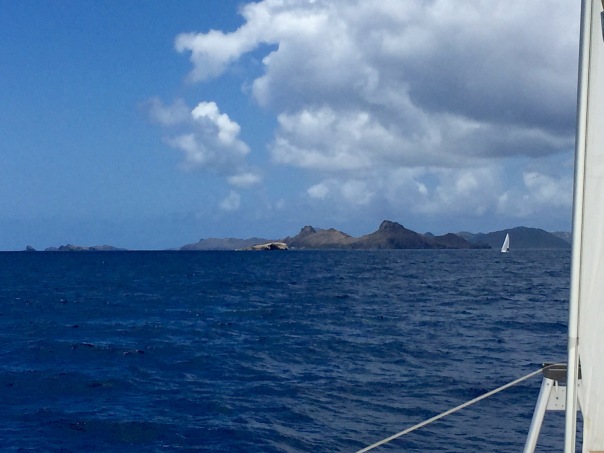 St. Barts is in sight. 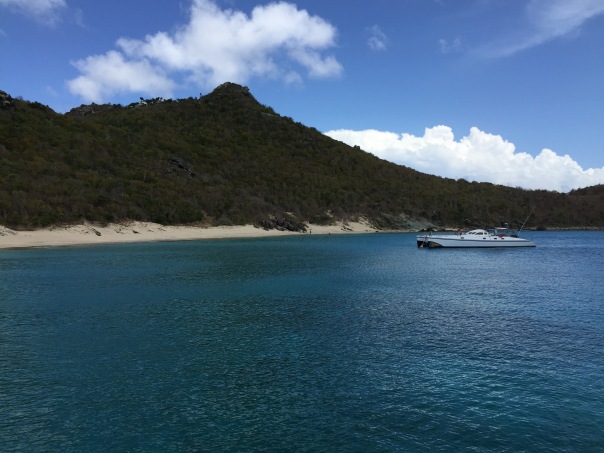 The water is beautifully clear – I counted 5 starfish on the sand 12 feet below our boat while at anchor!

The French are trying to restore the bay after damage from anchoring and have installed several free mooring balls which we were happy to use. And their efforts are working as much of the sand is gaining sea grass and we saw a lot of turtles and other marine life. 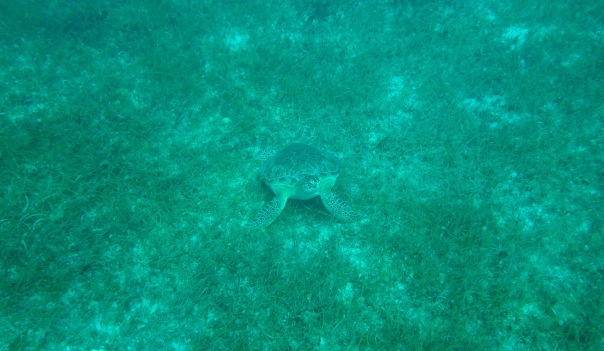 This turtle posed for the photo! 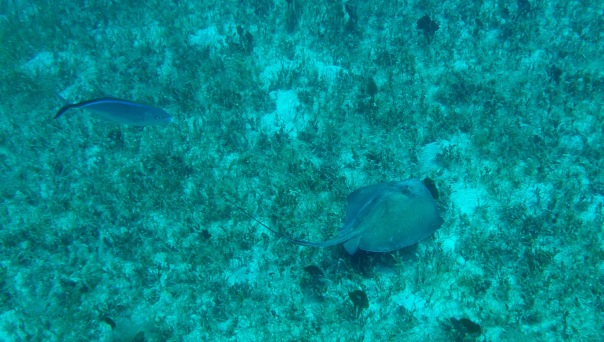 Rays and fish just below our boat.

While moored in Colombier we went scuba diving two times on the south side of Ile Petit Jean. The coral and fish were more plentiful than any other Caribbean diving we have done so far.  Our camera wasn’t graded for the depth of our dive, so I don’t have photos, but we saw many schools of fish in a variety of types and sizes.  Also the sponges were HUGE! They looked like giant planters that could be used in a garden.

We also spent a lot of time hiking from Colombier. Here are some of the beautiful scenes from our hikes: 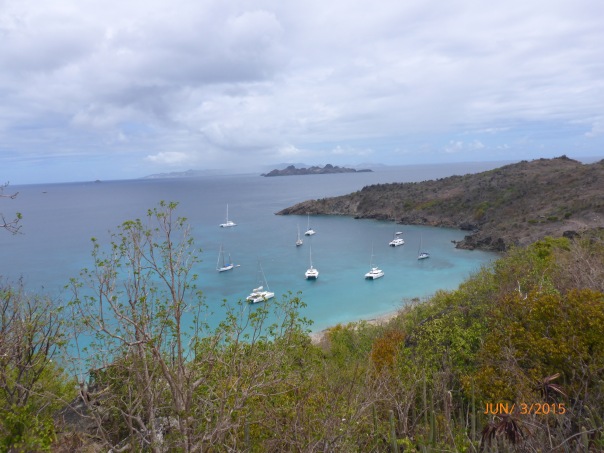 LIB nestled up close to the shore in Colombier. 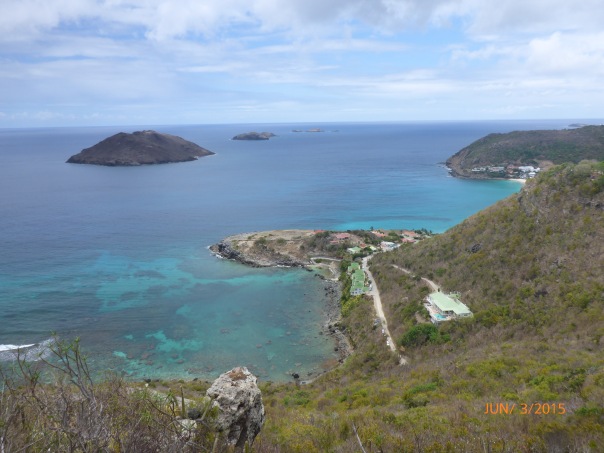 Just another beautiful bay, but too shallow for us to anchor here. 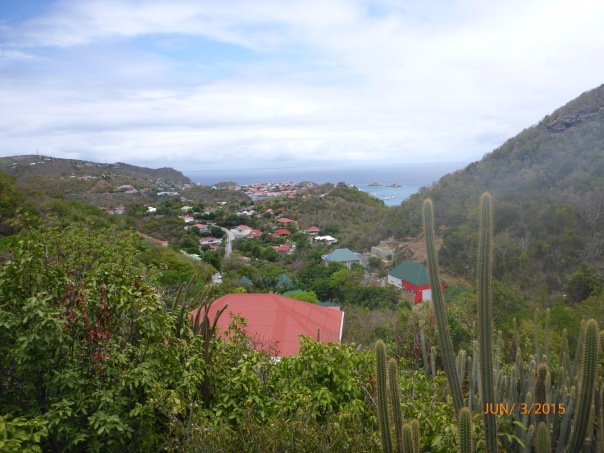 Gustavia in the distance. 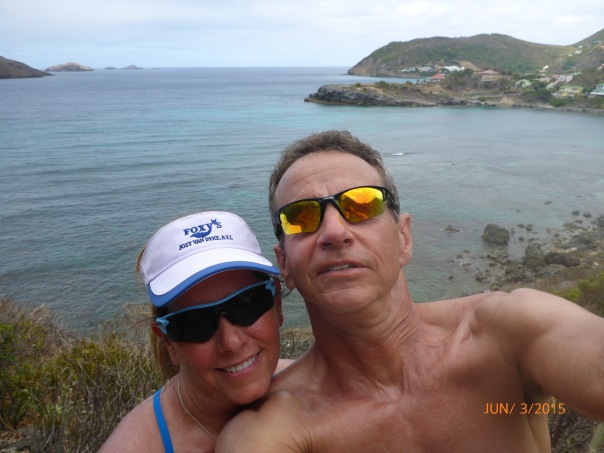 Gotta have a selfie. 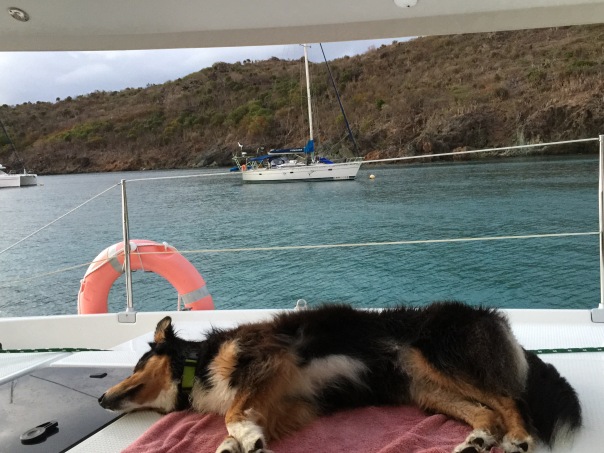 We managed to exhaust Captain! 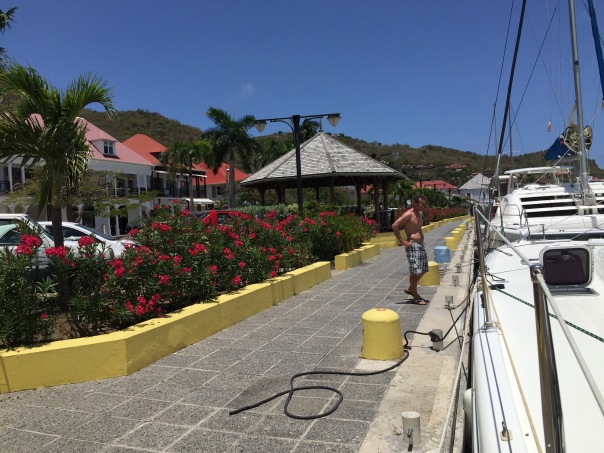 The public pier of Gustavia is clean and landscaped.

The public dock in Gustavia was our next stop on St. Bart’s.  I have to say, this is a gorgeous town where you can buy all kinds of beautiful baubles, clothes, food and wine.

We spent three nights in Gustavia and sampled food from several delicious restaurants. And we managed to find chocolate croissants again! YUM.

After sampling Gustavia, shopping and not buying the rather expensive clothing, we decided Colombier was more our style. 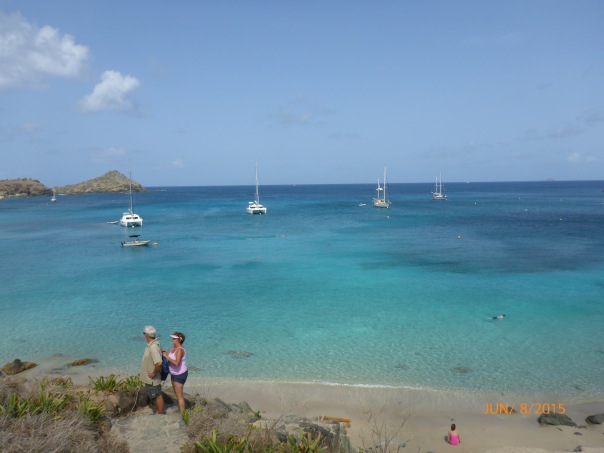 Kathe and Gary ready for our walk.

So back we went to Colombier to meet up with our friends Kathe and Gary on Tribasa Cross who braved a slog into the wind so they could meet us on St. Bart!

It was great sharing sunset drinks with Kathe and Gary, then hiking with them the following day.

I much preferred St. Bart to St. Martin, at least on this trip. St. Barts was easy to navigate and everyone was very friendly. I was able to practice some very rusty French and my efforts were kindly received. Gustavia feels like a quaint, clean, upscale European city and everything we needed was easy to reach on foot.

An added bonus is that the French are very nice to dogs. The restaurants welcomed Captain when we stopped to eat. In fact in every restaurant the staff immediately brought Captain a bowl of water.  She usually received her drink before we did! 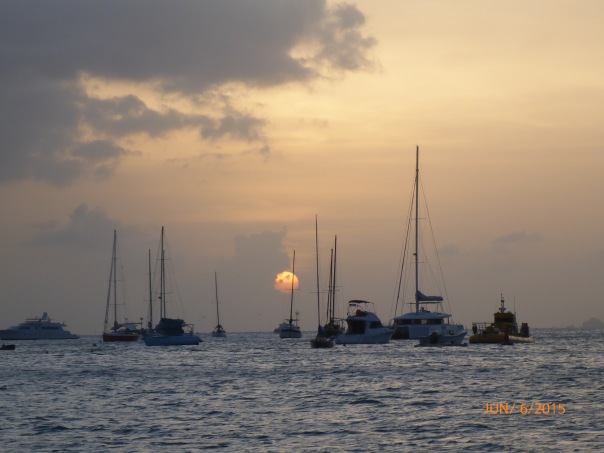 We really enjoyed the remote and the city life on this island.  St. Barts is definitely on our repeat list.