Two hundred forty one boats  from the Virgin Islands, U.S., Puerto Rico and other places entered this annual event.  A total of 180 poker hands were sold. For those who don’t know, a Poker Run is when boats quickly motor from a starting point to five locations within the BVI.  Upon arrival at each designated spot, the boat is given one playing card. After collecting a card at each stop, the driver returns to Leverick Bay and creates his best 5 card poker hand.  The best hand wins a cash prize of $10,000.

Apparently the BVI police are very aware that each stop is actually a party scene and they were ready for action as you can see them departing prior to the start of the Poker Run. 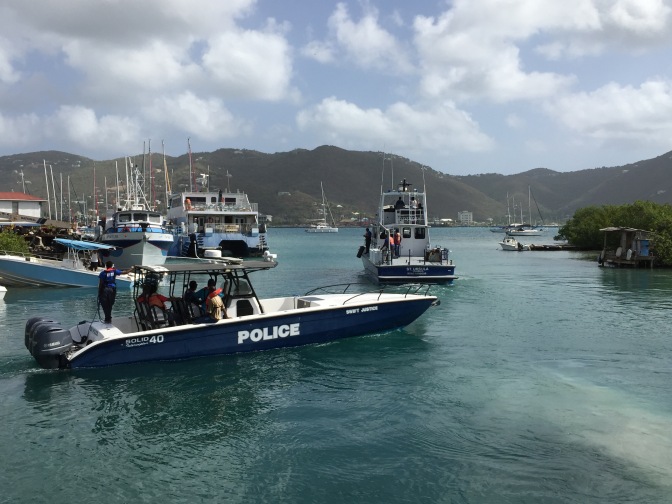 Normally the Sir Frances Drake Channel is dotted with sailboats and aside from the occasional ferry or tender, few motor boats are seen zipping around.  However, yesterday as we were coming into the North Sound of Virgin Gorda, this was the view behind our boat.

The start and finish of the Poker Run is at Leverick Bay on Virgin Gorda where we happened to be heading yesterday. That is why we felt like we were being chased by motor boats all day as they completed their fun in the same bay where we were headed.

These boats “chug” along a bit faster than we sail and we were overtaken often during our sail from Road Town to Virgin Gorda.

Lest you think the Leverick Bay Poker Run is all about the luck of the draw, there are also prizes for “the most original boat, best boat performance, best dressed crew and best dressed lady.” In total, $15,000 worth of prizes were distributed.

Happily no injuries or accidents were reported this year.

If you are interested in buying a hand in next year’s 14th Annual Leverick Bay Poker Run, get your $250 entry fee and a boat ready.