← Lightning ~ Damage and Delay
Back in the Pack Down the ICW →

Away We Go ~ ICW Week One

Nearly 2 1/2 years ago, I mentioned to Frank that I really wanted to join the Snowbird Rally which traveled from the Chesapeake to Miami down the ICW.  Ironically, one June evening this summer, while in the Bahamas, we introduced ourselves to a fellow boater who is the administrator for several FB pages; Wally Moran.  Turns out, at one time Wally was the coordinator for the Snowbird Rally and he was planning his own rally down the ICW this year.  We talked with Wally for a bit and he sent us information about Sail to the Sun 2016 ~ his ICW rally.

That chance meeting put us on the path we are now taking ~ a trip down the ICW in the company of 20 other boats, led by Wally.

Our two month trip from Hampton, VA to Miami, FL will cover more than 1,000 miles of inland travel through backwood, deserted rivers and fast paced, modern coastal cities.  We will navigate narrow cuts dug years ago to connect rivers and we will traverse large open sounds that will make us miss our sails.

MISS OUR SAILS?!  Yep.  My incredibly smart husband made arrangements to have our mast removed and shipped to Miami!  A sailboat with a high mast like ours, usually has to exit the ICW and go out into the Atlantic Ocean to avoid fixed bridges that are too low for the mast to clear.  Without the mast, LIB’s maximum height has gone from 68 feet to 14 feet. 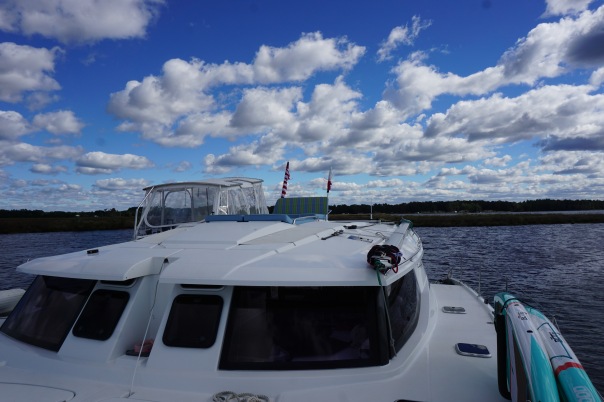 No mast means no stress on the ICW

As a result we clear ALL of the bridges! Plus there are several bridges that open but the closed clearance is high enough for us to pass without waiting for the bridge opening.

Trust me when I tell you this GREATLY reduces the stress of traveling the ICW.  Already a few boats in our rally have had to remove their antennae and wind vanes.  Two other boats had to weight their boats to heel as they passed under a fixed bridge so they could get the mast through. 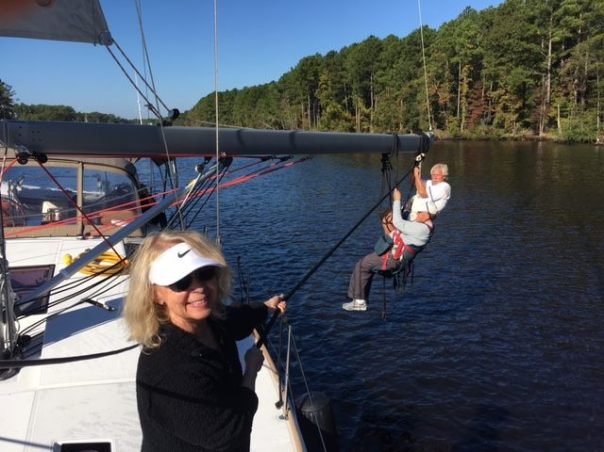 Thank you to Brad and Terrie for the picture.

Brad and Ken are hanging off of the boom to tilt s/v Reflections.  Additional people were recruited to weigh the boat before she was heeled enough to fit under the fixed bridge!

I salute their ingenuity but I do not envy them the stress of watching their masts clear bridges by mere inches!  Plus that trick obviously only works with a monohull so LIB doesn’t qualify.

Hurricane Matthew’s pounding of the east coast created some high water, a lot of debris and unknown shoaling changes to the Dismal Swamp which was scheduled to be our entrance to the ICW.

Caution dictated skipping the Dismal Swamp and heading to the Virginia Cut as our entrance to the ICW. I am disappointed that we skipped the Swamp because of it’s age and history, but the Virginia Cut is an easier and wider passage.

Heading toward our first railroad bridge.

Day one we crossed the Newport News Channel which is a huge military area and a large commercial shipping area plus the hub of several channels for recreational boaters. In land terms, the Newport News Channel is like a highway interchange, but there are few lane markers and overtaking vessels hail you on the VHF when they are about to pass.  Dallas folks, think of this as the I635 of boating ~ without brakes.

Just after leaving that channel, we approached our first lock!  Most of us in the rally had never been through a lock so we were all inexperienced. But the lock tenders were patient and efficient, so everything went well. 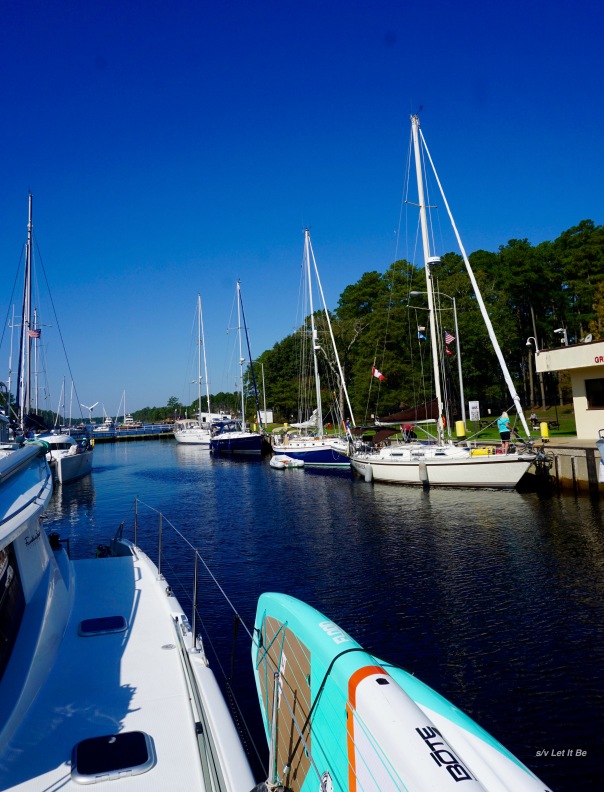 Boats are tied to both sides of the lock.

EXCEPT, the second we were tied up to the wall, Captain jumped off the boat and made use of the lush green grass across the concrete barrier.  I wish I could have snapped a picture, but I was busy tending lines.  I don’t think the lock workers were very pleased with Captain, but she certainly felt much better!  Once she was back on board we could laugh about our very independent dog.

Rather than bore you with a detailed account of each day, I expect the documentation of our ICW trip will be mostly photographs.  The scope of the scenes will be difficult to capture, but I hope to give you a glimpse of the areas we see.

If there is something you think we should watch for on our trip or some place you loved when you traveled here, please share in the comments so we can try to see it! 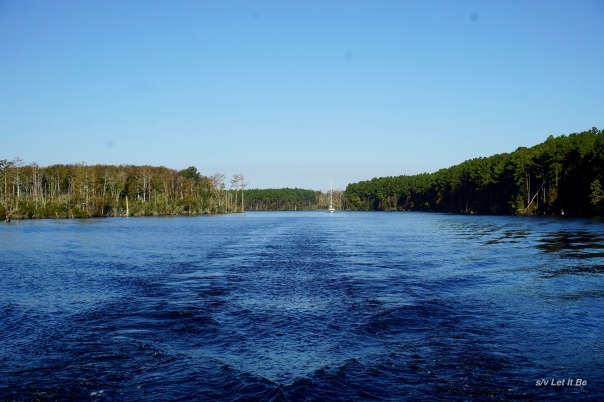 Waiting on a very low bridge to open.

On the third day, our group was heading across the Albemarle Sound and up to Elizabeth City, but because the anticipated weather showed we would be motoring across the Albemarle in high winds, we chose to skip Elizabeth City and spend a few nights on our own schedule.  I think after so many months in the dock, we wanted to anchor out and hang on our hook for a few nights. 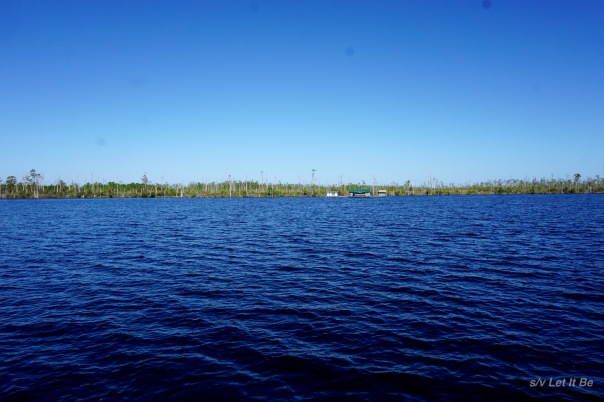 The only structures were fishing camps built on stilts in the water.

After reading about the 150,000 acre Alligator River Wildlife Refuge across the Albemarle Sound, we aimed our bow in that direction.  Apparently the red wolf in the wild became extinct, so in 1987 a pair of red wolves from a zoo was reintroduced to this Refuge because the environment is perfect for them.  Well over 60 pups have been born in the wild since 1987 and some nights a series of howls can be heard from the pack.  We didn’t have the pleasure of hearing the wolves, but we still enjoyed the natural beauty of the Little Alligator River.

Fog the morning we awakened on the Little Alligator River.

The next morning we were surrounded by fog and the visibility was minimal.  This was the perfect excuse to spend a leisurely morning on LIB and watch the day develop.

Loaded up Day Tripper for a trip to shore.

The fog burned away to reveal a spectacular day, so a trip to shore and a bike ride along the levy was in order.  Cappy was super happy to run, sniff and explore while Frank and I tootled along at a casual pace.

The next night we anchored in the Alligator River.  We found another quiet bend in a finger off the main river and dropped the anchor.  Once again we awakened in a cloud! 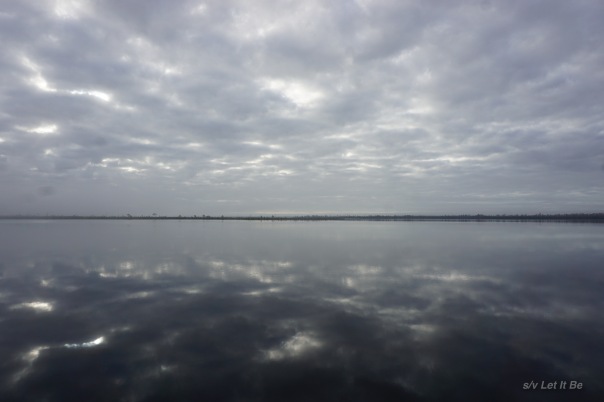 This time we lifted anchor and motored on as soon as we had reasonable visibility.  The patterns the clouds created on the gray water were beautiful. 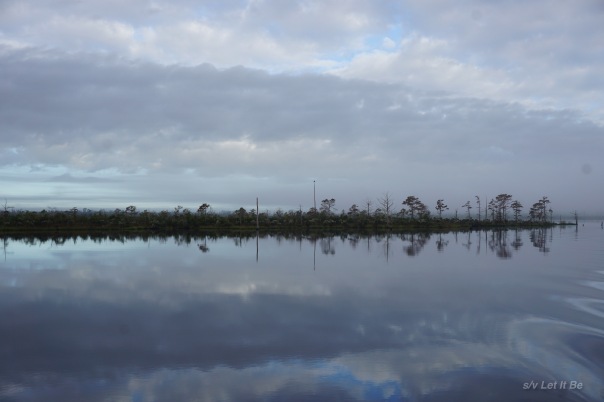 As we motored toward the Alligator/Pungo River canal, the clouds and landscape made me think of Jurassic Park.  I kept waiting for a T-Rex to lift its’ head among the trees.

Once past the Alligator/Pungo Canal, we will reconnect with Rally and hear all about the stops we missed.

Posted on October 23, 2016, in Uncategorized and tagged ICW, Intracoastal Waterway, Let It Be, LIB, Sail to the Sun Rally. Bookmark the permalink. 2 Comments.

← Lightning ~ Damage and Delay
Back in the Pack Down the ICW →