Before I actually began to sail, I thought sailing would feel like that old Christopher Cross song “Sailing” sounded.

Well that was certainly not true these last three weeks in the BVI’s where we consistently saw winds above 20 knots and our route choice caused us to slog upwind as often as not.  Which meant that our sailing felt more like a ’70’s head banger than Christopher Cross!

The photo below was taken when we were flying only our spinnaker at 135 degrees port, heading to St. Thomas.  9.2 knots was not our highest speed, just the one I happened to get in a photo. 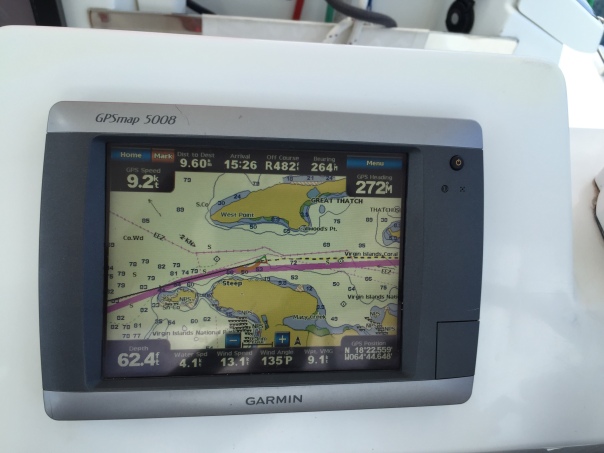 While more seasoned sailors wouldn’t be phased by these winds and speeds, I am still pretty new to the sailing game.  Despite my lack of experience, I thought this sail was pretty awesome, though I do wonder if we were stretching the limits of our spinnaker!

We sailed to St. Thomas to await delivery of an autopilot part from Garmin; which never arrived (frustrated sigh).  So while cooling our heels, we toured the island and I got to spend a few days driving on the left side of the road.  I was concentrating too hard to catch the views while moving, but we did stop to soak in the beauty.  Here are a few of our favorite photos: 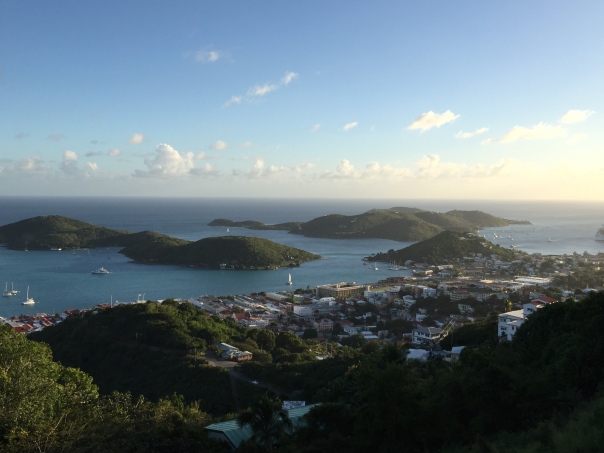 Charlotte Amalie – there were 5 cruise ships that day!

After 3 days in St. Thomas, we departed, sans the autopilot part, and returned to Tortola motoring directly into the 23 knot winds.  Still, at this stage of my experience, every journey includes a teaching moment. Motoring into the wind, jockeying the troughs and peaks of the waves increased my confidence in Let It Be and taught me a little more about her abilities and my own.

This trip made me realize that on land, schedules dictate many decisions and it is rather common to sort of adopt the US Mail motto when completing errands and meeting deadlines:  “Neither snow, nor rain, nor heat, nor gloom of night, stays these couriers from the swift completion of their appointed rounds.” Herodotus, 503 B.C.

Well Herodotus, I believe in the future, when sailing is my transportation, snow, rain, wind, waves and gloom of day or night shall certainly determine wether I set sail much less complete my appointed rounds!  I have no desire to spend my future fighting wind and waves but prefer to accept their superior strength and work with them.  Let my schedule adapt for a change instead!