So I know this was much bigger news on October 19, 1781, but we sure enjoyed strolling around Yorktown and visiting the scene of this county-creating event!

We decided to sail to the Chesapeake for our first hurricane season because we wanted to experience some of our country’s heritage via sailboat since so much of the trade, transportation and communication during our “founding years” took place on these waterways. Traveling by boat along the Chesapeake Bay is an opportunity to better understand the distances between famous locations along the eastern coast.

I have been amazed how much closer these major gem stones of U.S. history are to one another than I realized.  Maybe living in Texas, where everything is so spread out, skewed my mental perception of the distances between major cities and battlefields in the Colonies.  Or maybe I just didn’t pay enough attention to history when I was in grade school, but I have been surprised at the proximity of these landmarks of our nation’s history.

After leaving Beauford, the first stop in the Chesapeake on our history sail was, quite appropriately, Yorktown where General George Washington accepted Britain’s surrender, thereby ushering in GB’s recognition of the new nation.  It is a little mind boggling to realize how important that surrender was and where it took our fledging nation.

Yorktown has done a nice job of retaining some of the historical sites while still pressing forward to make themselves a desirable stop for those more interested in the now than the then.

Along the York River near the bridge is a very nice wharf where boaters can tie up and join other visitors strolling the land.  The wharf has restaurants and shops, plus signs along the sidewalk that describe local history, vegetation and critters.  There is a sandy beach that was crowded with families and young adults enjoying the waterfront.

Across the parking lot from the beach is a cave that Cornwallis used when avoiding artillery fire during the American Revolution.  A juxtaposition of historical figures ducking enemy fire and modern citizens ducking the intense heat of July. 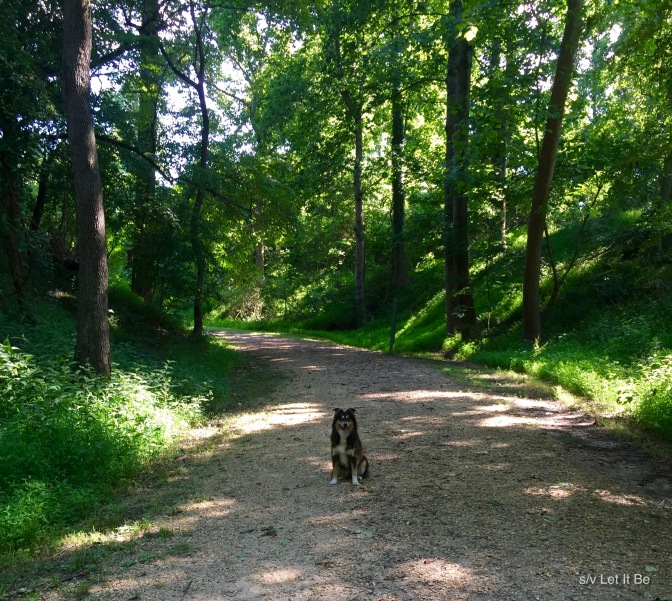 After walking past the throngs of people, we walked the old plantation road that led us uphill to the visitors center, the battle fields and an area of restored buildings.

Next we sought out Grace Episcopal Church which was built in 1697. It was here that we stumbled upon the most unusual event of the day.  In the church graveyard an orchestra was setting up and folks had arranged folding chairs under the sprawling trees that shaded the gravestones.  We were a bit surprised to learn that on summer evenings, Grace Episcopal sponsors a variety of musical entertainment.  We were invited to “pull up a headstone and have a seat.” 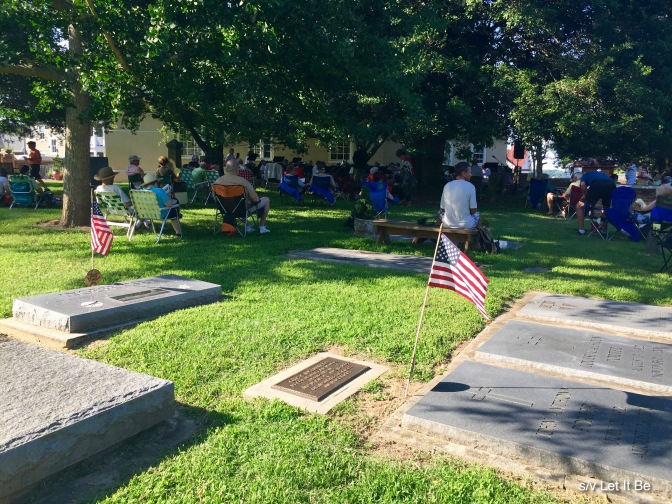 Some locals brought snacks and beverages!

Admittedly we were a bit surprised by this casual invitation, but upon further reflection we decided the music and visiting was an unusual but positive way to “liven” up the cemetery.

The 25 piece orchestra played patriotic, turn of the century tunes and a moderator introduced each piece with a tad bit of its history.  We thoroughly enjoyed the time we shared with the locals and the deceased!

Frank, Captain and I strolled through Yorktown, reading the historical markers placed along the roads and imagining what Yorktown would have been like when the 49 year old General Washington was fighting the British.  Despite its’ epic battle history, the town had a peaceful, relaxed vibe and the evening cooled down nicely, so we stopped for dinner on a patio by the river.

Let It Be was anchored in Sara Creek just across the York River and after dinner it was time to fire up Day Tripper and head back.  Our return to LIB was timed perfectly because the setting sun had drenched the sky in vivid oranges as we dinghied back “home.” 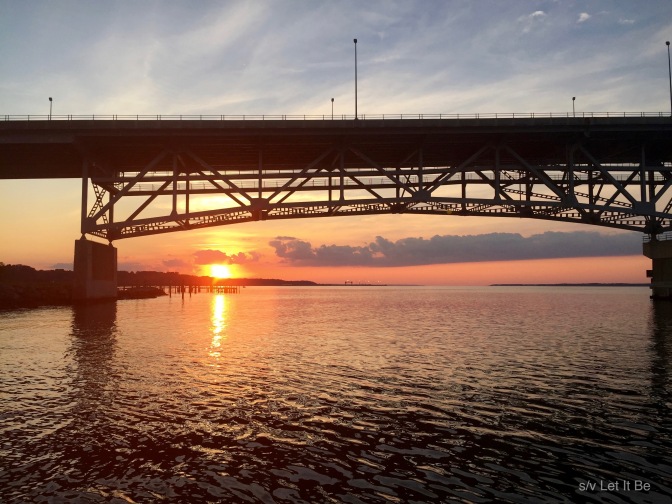 Sunset under the York River Bridge.

5 thoughts on “Cornwallis Surrenders to Washington!”