Eating Our Way Through Georgetown

Sun up in a deserted Georgetown, SC

Georgetown is a darling little town. I am pretty sure I could live here if I didn’t live on a boat.

The day we arrived, the town was hosting Taste of Georgetown and, for a donation of $20. each, we strolled and ate our way along the main street sampling food from the sidewalk tables as we acquainted ourselves with the town.

Captain was prepared to catch any food that dropped!

The following day there was another fundraiser, this one for a local school.  One more $20 donation bought all the steamed oysters you could eat.  I didn’t partake, but I think Frank ate for a solid three hours!

At one point, Frank and several of our rally buddies took a break from eating proclaiming they were “stuffed.”  But not five minutes later the streamed crab was brought out and suddenly everyone found room for more food! 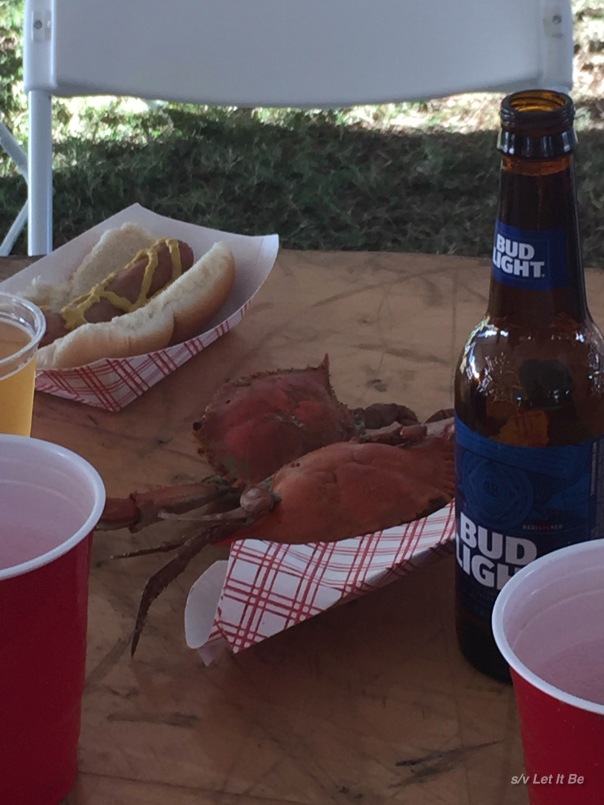 One skill Frank and I have learned while living on LIB is line splicing. We have found this very useful and have completed several projects, such as replacing our life lines, because we have this skill.

Always one to share knowledge, Frank hosted a splicing class on LIB.  Eight or nine boats were represented at the class and before it was over everyone had ideas for new boat projects. (Yippee!) I played TA to “Professor Frank,” which means he taught the class and I got to flit around and answer questions when I could.

The next scheduled marina is Charleston which is about 60 miles from Georgetown. Several members of the group, including us, broke the trip into two days and anchored overnight at Whiteside Creek, just a smidge off of the ICW.

My photo card stopped working so I don’t have pictures, but we had a stellar time.  Frank, Captain and I dinghied down a tiny cut with tall grass on both sides.  I feared we were going to suddenly come to a screeching halt because the engine got stuck in shallow water, catapulting Captain and me out of the dinghy OR as we moved through the reeds an alligator would jump right into the boat!

Thankfully neither happened, but we did scare a bunch of mullet fish that literally jumped out of the water to avoid us.  Captain was hopping from one side of the dinghy to the other trying to catch the jumping fish.

I SO wish I could have captured that on film!  I’m certain Frank was reliving his past when he and friends would fly through the bayous of Louisiana.  I was holding onto the dinghy and Captain telling Frank to slow down.  But actually ~ it was exhilarating and beautiful.

Once back at Whiteside Creek, we joined the rally group for a dinghy raft up. We shared drinks, snacks and conversation as the sun set behind us.  Sundown brought much cooler temperatures, so everyone zipped back to their respective boats.

The next morning we were up early and motored toward Charleston.  The Charleston Harbor looked huge when we left the narrow ICW and the city itself will be hard to cover by foot.

Be prepared, Charleston is such a pretty town with it’s French Quarter and long history, that the next post will be full of photos if I manage to capture what we see.

In the mean time, here are two pictures from this week…

Has Forrest Gump been here?

This random, happy pirate made me smile as we made our way down the ICW.  I hope you smile too.

Posted on November 12, 2016, in Uncategorized and tagged Georgetown, ICW, Let It Be, LIB, live aboard, travel. Bookmark the permalink. 2 Comments.