This is as close as I got to a “family photo.”

Considering there are only four in our family, we sure cover a lot of the globe! Our eldest son, Hunter, has been living in Spain for a year. Our youngest, Clayton, has been living in California and traveling any weekend he can manage to be away from work.  We, of course, have been moving about on LIB.

As a result of being far apart, it is rare for all of us to be together; but when we are, we have a great time and we get along very well.  In fact, although we are miles apart physically, we are a very close family and we miss being together.

So obviously, the apples didn’t fall far from the travel tree and being active is another trait the kids have inherited from us.  That means that when we are together, we generally stay very busy.  This visit to Providenciales, Turks and Caicos, was no exception.  Although Hunter and Clayton dislike my posting pictures, and I catch grief when I post a photo of them on any social media, I’m posting these pictures anyway.  Here is a glimpse into the week Clayton and Hunter were with us and the following week while Hunter was still on board. 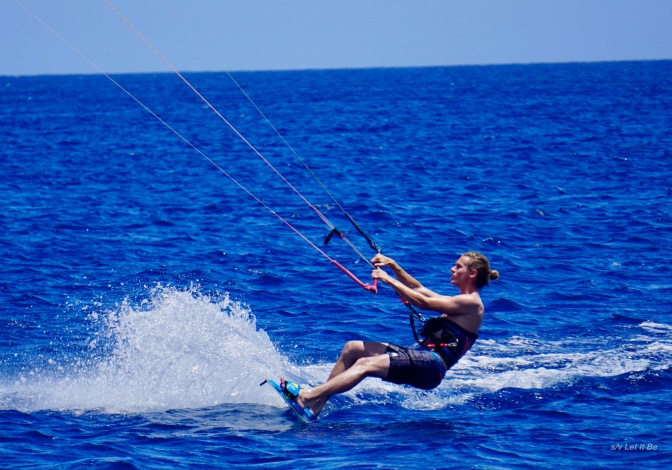 Returning from a kite trip.

Hunter and Frank launching a kite from LIB.

Clayton and Captain off to explore a bit.

One of the pretty beaches we found while exploring Provo.

It seems like after I had moved away from my parents home, anytime I would return to visit, the absolute feeling of “home” and being completely relaxed often translated into a nap on the couch.  Apparently our kids feel the same tranquility when they are here.  I was especially happy to see them feel so comfortable in our boat since that is now our “home.”

I didn’t get a good picture, but Clayton went scuba diving with us off the western coast of Providenciales.  This is the first time we were able to go diving with Clayton since he and Hunter were certified back in 2014.  We saw a decent number of fish but it was not a particularly clear dive.  Still it was good to explore with him. (Hunter had a sinus infection and couldn’t go.)

After Clayton flew back to California, we had an excellent weather window to go to the Dominican Republic.  We thought it would be especially nice to be in the DR while Hunter was with us so he could act as our interpreter!

The passage was fabulous! We sailed most of the way with favorable winds and seas. 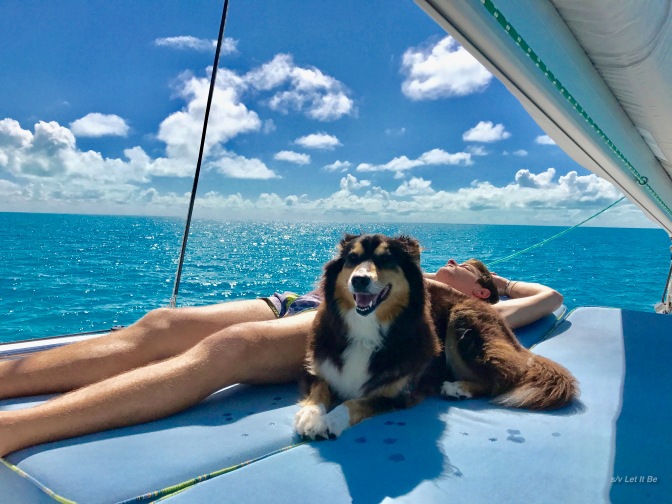 A visual display of just how comfortable the passage was to the DR.

The topography of the DR is completely different from the Bahamas and the Turks and Caicos. The lush, mountainous land is a rich and an interesting change from what we have seen for the last five months.

A double rainbow met us at the entrance to Ocean World Marina.

The name Ocean World made me think of an amusement park and indeed there is an amusement park right there at the marina.  The marina was clean and the people were really nice, but to me it felt too much like being in a very developed area.

However, Ocean World was an excellent place to use for exploring and, with Hunter fluent in Spanish, we were able to communicate well with the locals and we really enjoyed having that extra insight into the people here.

Although there is a world renown kite beach called Cabarete here, the wind was not very cooperative.  So Frank and Hunter went surfing and I walked the beach. Check out those super cool, rubber loafers Hunter rented from the surf guy!

Even along the beach there are many trees.

I enjoyed peaking into the trees and seeing the little areas where benches and huts were hidden. Many of the benches were made from discarded surf boards and other recycled items.

Colorful huts right near the beach.

Enjoying an afternoon snack along the beach.

The area where we surfed was pretty sparse with the huts and surf rental huts built under the trees, but we also found beaches that totally catered to tourists.  Even though it was nice to have plenty of options for drinks and snacks along the touristy beach, vendors approached often trying to sell us jewelry or cigars or pralines or lunch, etc.  They weren’t offensive, but it makes me uncomfortable to say no.  I could do without so many people asking me to buy things.

Fortunately the wind did kick in one day and Hunter and Frank went to Cabarete to kite-board. They said the scene was great for kiting and that there were many really excellent local kiters. Cabarete was a crowded kite area and probably not the best place for beginners so I was glad I had chosen to stay at LIB and have some quiet time. 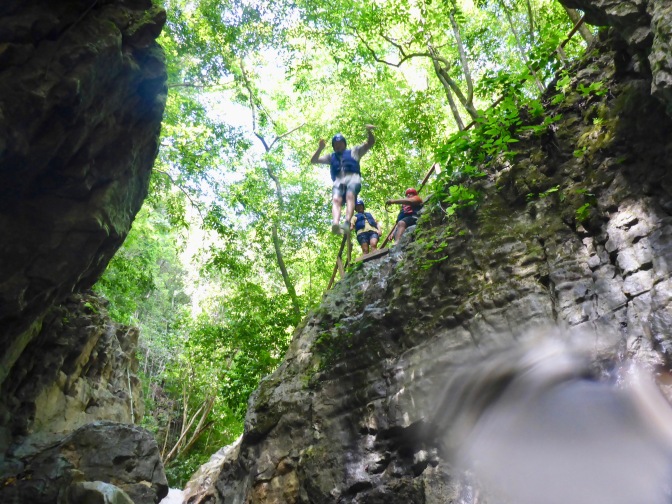 Hunter jumps from on of the falls.

Twenty-seven Falls is a must do event when visiting the northern part of the DR.  We spent one afternoon hiking up a mountain, then sliding, jumping and swimming our way back down.  This was a hugely fun day and I highly recommend it!  A guide is required and I would not have wanted to try to do this without one.  After all, we were jumping into pools of water and we would not have known their depth without a guide to help us.

In addition to getting a little exercise, the scenery was beautiful!

We look stunning in our protective gear!

Moving east along the northern coast of the Dominican Republic can be a challenge because of the easterly trade winds.  We wanted to move east to Marina Bahia in Samana and the weather forecast showed that we had to move quickly or we would have to stay in Ocean World for another 7-10 days.  There was definitely more to see near Ocean World, but we had to move.

The weather didn’t look great to head east, but we decided to make a run for it.  This was not our best decision and after slogging in to the wind from 9:30 am to 4:40 pm, we decide to take refuge behind a mountain in near Rio San Juan.  We had a little trouble finding a good anchor spot but managed to get settled by around 7 pm.  We had a good dinner, then climbed in bed for a nap until midnight.

At midnight we upped anchor and again headed east. Our hope was that the winds would be less at night. Frank took the first watch and because it was so windy, he let me sleep until the winds settled – around 5 am!!!! Fortunately, after I took watch the wind fell and was below 10 knots the remainder of the trip. 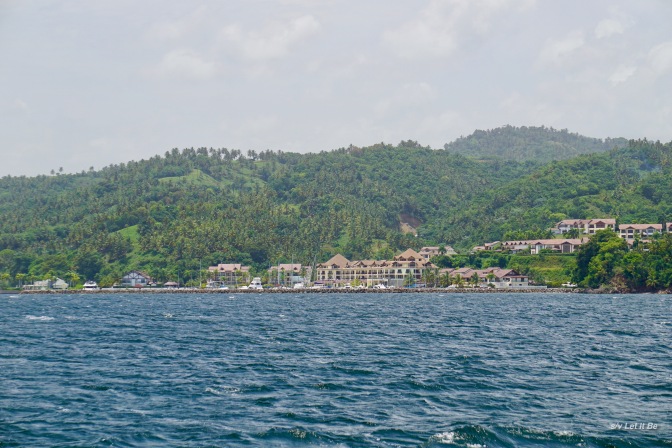 We arrived at the Marina Bahia around 1:30 pm and it was a welcome sight.  The trip was not horrible, but it wasn’t our best passage either.  The trees surrounding this marina are thick and verdant and I practically expect monkeys or parrots among the branches!

Hunter kindly pointed out that during his 25th year, we only saw each other for a total of maybe three weeks.  At least this year we had the chance to celebrate his 26t birthday while he was on LIB!  Nothing like a homemade cake to remind you of your childhood. 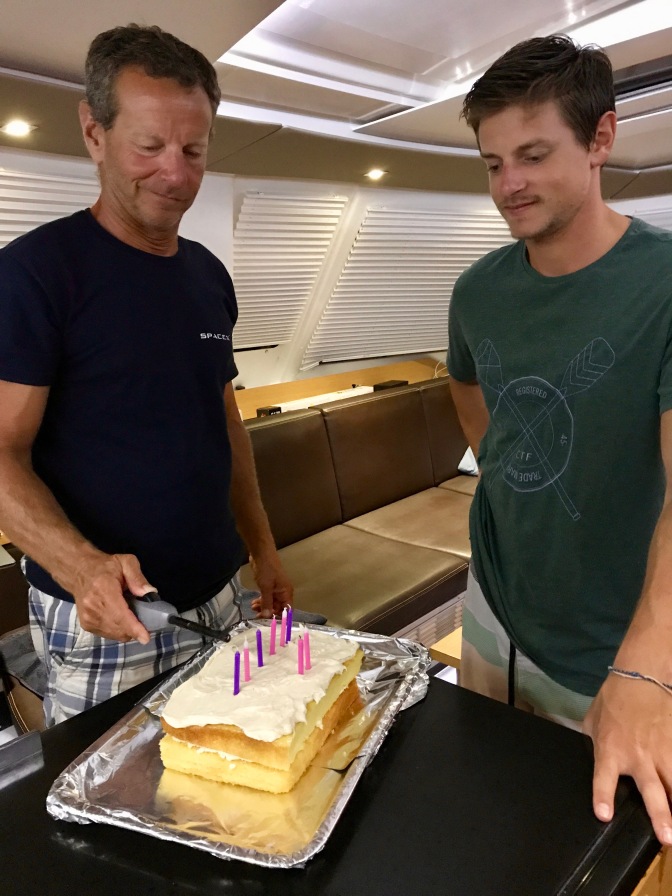 Creative candles since I didn’t have 26 of them.

We have a few more days before Hunter leaves and we hope to spend a couple of nights in Santa Domingo with him.  It is really hard to say goodbye to my kids but at least this time we have plans to see each other again pretty soon!

As always, thank you for visiting our blog! If you want to know what we are doing more often, feel free to visit our FB page: Let It Be, Helia 44.