For the first time in my life I truly understand that the difference one day can make in my life is huge. I have so many examples recently that have driven this home and unfortunately they have mostly been sad examples.

Our dear friends, Ken and Laurie, sent a video of their sailboat Mauna Kea while they were finalizing preparations for Hurricane Irma which devastated St. Martin a mere 24 hours later.  Mauna Kea had engine problems and it was unsafe for Ken and Laurie to sail out of harms way.  A picture taken from the same place 24 hours later would show Mauna Kea in a much different condition.

We were in Chicago glued to the television as we watched Hurricane Irma swirl toward Puerto Rico where we had left Let It Be and our sweet dog, Captain.  We were very lucky because in the last 24 hours, Irma took a slight wobble north and our boat and dog were spared! What a difference a day made.

Fast forward about a week to 5 pm Saturday, September 16th.  Frank and I were sitting at the pool at The Yacht Club in Palmas del Mar, Puerto Rico.  We were chatting with other live aboard folks lounging in the pool and we all agreed that the morning forecast of 60 mph winds for Hurricane Maria were not a problem for our boats.  We could be comfortable about staying in the marina.

An hour later, when we read the 5 pm hurricane forecast, the story was dramatically different.  Hurricane Maria had changed from a category 1 to a category 4 forecast! And she was barreling directly toward our marina!

The Yacht Club from the top of the mast the morning we left.

Frank and I immediately began redressing Let It Be; returning her sails to working order, putting the enclosure back on the helm, replacing the broken anemometer (luckily the new one had arrived in the mail the day before!), walking to a nearby mini market for canned goods and plotting our departure for early the next morning.

We left Palmas del Mar on Sunday morning, less than 24 hours later,  and had a beautiful passage of about 375 nautical miles to Bonaire.  We sailed for the first day, then motor sailed the remainder of the trip.  We had mostly following seas that were never greater than 1 meter. Surprisingly, this was one of our most pleasant passages!

Twenty four hours later, our friends Greg and Shelly on s/v Sempre Fi had found the quickest flight they could back to Puerto Rico to prepare their sailboat and leave the marina.  Shelly and Greg left Palmas del Mar on Monday, about 24 hours after we did. They experienced 21 foot seas and a lot of wind. They could see the very outer bands of Hurricane Maria and tension was high on board! Eventually they encountered ‘a parking lot of tankers and barges drifting in the sea,’ Shelly said.  This was their indication that they had run far enough to be out of harms way and could continue more comfortably to Aruba.

Once we arrived in Bonaire, we found wifi and checked on our friends back in Palmas del Mar and learned that Maria’s eye had passed directly over our marina! Thankfully our friends are all safe, but not all of their boats survived.

What a difference 24 hours can make!

Frank and I like to tease that since moving aboard, we live our lives at 6 knot.  Thankfully over a 24 hour period, that seemingly slow six knots was enough to remove us from harm! 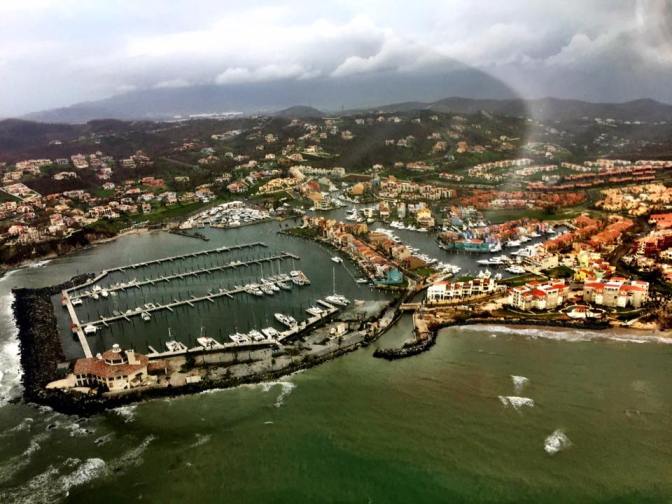 Drone photo of Palmas after Maria (sorry don’t know who took it!).

We mourn for our friends, their homes and the beautiful islands that have been devastated this year by hurricanes.  All those suffering loss from Harvey, Irma, Jose and Maria are in our thoughts and prayers!

Although this season has been a challenging and heart wrenching one, we are trying to take away the positive aspects as well.  For instance, we have some friends whose boats survived hurricanes with nary a scratch! We have seen many people step up and make huge inroads in gathering and delivering food and water to those in need.  We have seen friends drive from Dallas to Houston, towing boats to help rescue stranded flood victims. There are silver linings to every cloud if we look hard enough.

On a personal note, this season has reminded us that we cannot be complacent about weather while living this nomadic lifestyle that is much more vulnerable to weather and storms.  We are reminded that we must do our best to keep Let It Be movement ready at all times.  We have agreed that we should try to keep our fuel topped off in case we have to sail away from a weather event. We are reminded that we must make our own decisions and allow friends to make theirs as well – what works for us might be all wrong for someone else.

We are reminded that we are blessed to have survived this season without injury or damage to property! (So far.)

Though this blog post could be construed as a negative reflection on sailing life, in truth, Frank and I enjoy living on our boat. While others might dislike the need to pay such close attention to the forces of nature, we find this lifestyle requires us to be more observant and respectful of the power of nature.  We are constantly learning to improve our ability to understand what surrounds us.  We can no longer jump in a car regardless of the weather and without regard for tides and seas and upcoming storms.

No doubt this life is a greater challenge than living on land, but for us it works.  We like the learning aspect and prefer to be caught up in weather and seas and trip planning rather than being concerned with the daily news or which Hollywood star has returned to rehab or who was this years biggest loser. (Plus we were too cheap to pay for cable tv!)

As always, thank you for reading. Next post I hope to report more positive things, like about the amazing diving in Bonaire!

11 thoughts on “What a Difference a Day Can Make!”