We left the ‘big city’ of Curacao around 1pm on Thursday, March 22nd. Ideally, we would have left much earlier in the day to allow us the greatest number of daylight sailing hours for our passage to Belize and to give us a better chance of arriving in Belize during daylight.

However, our satellite communication system, IridiumGo, was delayed at the Customs office in Curacao for over a week!  By the time we received the system and had it up and working, we were very ready to leave; thus our midday departure.

Using a weather prediction application called Predict Wind, we anticipated this trip would take approximately 7.5 days.  Our experience in the past has shown that we often are a bit faster than predicted, but I always mentally prepare for a slightly longer than expected trip.  That way arriving early or on time is lagniappe.

When we exited the canal of Willemstad, the seas were a bit rough and mixed, probably a combination of the wind, current and land mass.  The wind was quite sporty with seas of five to nine feet and we immediately put up our main and jib to begin our trip. 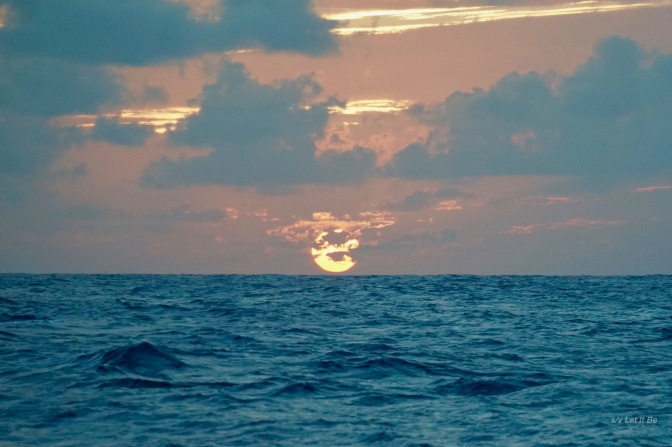 Sunset on our third night at sea.

As is usually the case, the first 24-36 hours of a passage, I have to reestablish my sea-legs. This means that Frank takes the bulk of the work and watches during this time. Thankfully I was not sick, but I can get a little queasy so I limit my activity to mostly sitting at the helm or sleeping the first day.  I am very lucky Frank is exceedingly patient and supportive as I acclimate. Plus he is usually pretty jazzed when we set out, so his energy is high while mine is a bit low.

After the first day, I felt a bit better and I improved as the trip progressed.  We were extremely fortunate with the wind and seas this trip and were able to sail the whole time. We flew the full main and jib during the day, then reefed at night as a safety precaution.

The wind was a little more east than was forecast which resulted in a slightly more downwind sail, especially after the third day at sea.  However, even with less north in the wind than was predicted, we managed this whole trip with zero engine hours!  That is pretty exciting.

We were making very good time Thursday through Tuesday and hoped we might arrive the afternoon of Wednesday thus making 1200 nm in less than seven days.  We even managed to have a 200+ nautical mile day on LIB.

With our speed in decline, we knew we would not be able to reach our planned anchorage in daylight so in the early hours of Wednesday we had to slow down significantly.  Of course, once our destination was out of reach for Wednesday, the wind kicked into gear! All of Wednesday afternoon and night plus Thursday morning the wind was consistently 25knots! 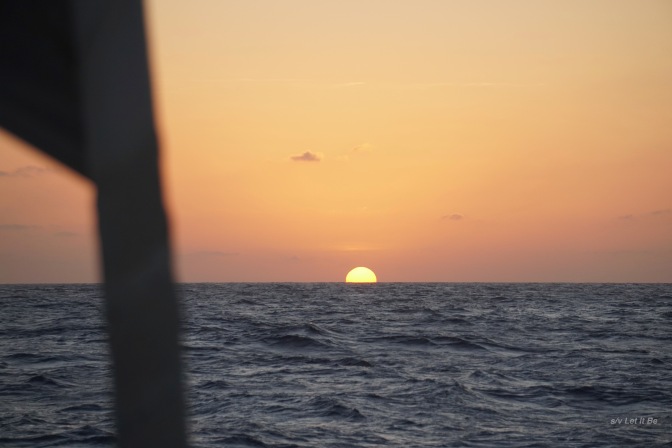 This tiny bit of jib is the only sail we had up our last night of the passage.

We dropped our main sail and had only a tiny piece of the jib out and still we were moving along at 5 knots.  In fact, we were unable to slow down enough to arrive in daylight and ended up having to sail back and forth outside of the reef surrounding the anchorage at Long Cay, part of the Lighthouse Reef of Belize. 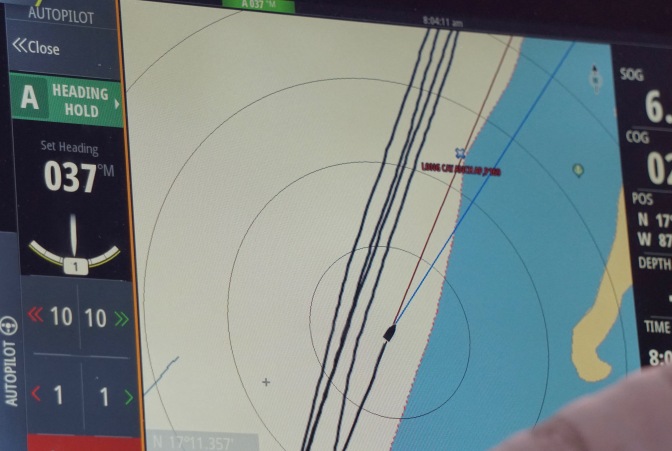 The tracks show how many times we sailed back and forth waiting for daylight.

I laugh when I see the tracks LIB made on our chart.  For two hours, until the sun was high enough for us to see into the water, we tacked back and forth outside the reef. When we were finally able to see a bit into the water, we furled the jib and motored through a break in the reef and into the anchorage. 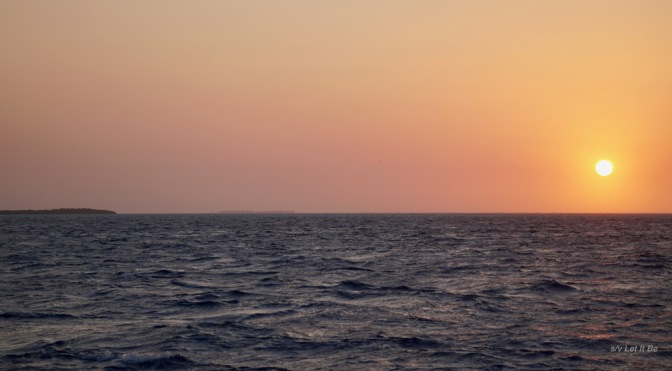 Sunrise with Long Cay to the left and Half Moon Cay in the distance.

Frank and I agree that even though this was an excellent passage, it felt great to drop anchor and feel the boat settle into a gentle rocking motion protected from the ocean waves.  After seven days of constant motion in the waves, it was really nice to be almost still!

People wonder what we do to occupy our time while on passage, after all, there is no internet, it is just Frank and me and we are in a rather confined space. I will not say the time just flies by, but the days don’t drag past either. 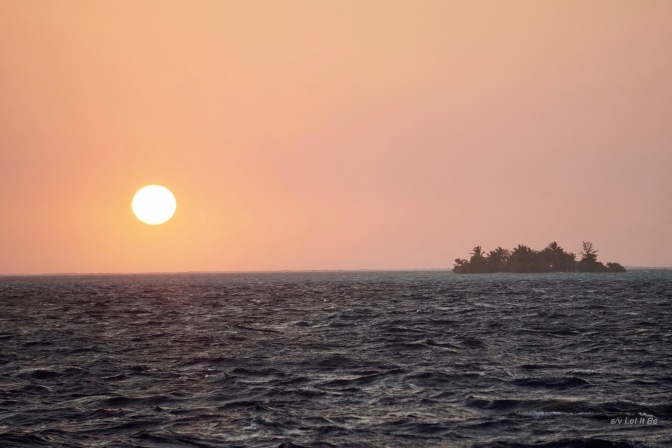 Sunrise was a welcome sight as we waited to enter the anchorage.

Audio books are my go to entertainment while on a passage. I had downloaded four books for this trip but sadly two of them had download issues! Sometimes I listen to music as I observe the night sky and ocean.  The moon was waxing this trip and added so much light to our night watches that we cast a shadow when outside.  Plus the ocean is dazzling at night as bioluminescence sparkles in the waves created by LIB.  I find night watches are the perfect place for prayer as well.  How can I not spend time in prayer when I am surrounded by the vastness and beauty of God’s creation? 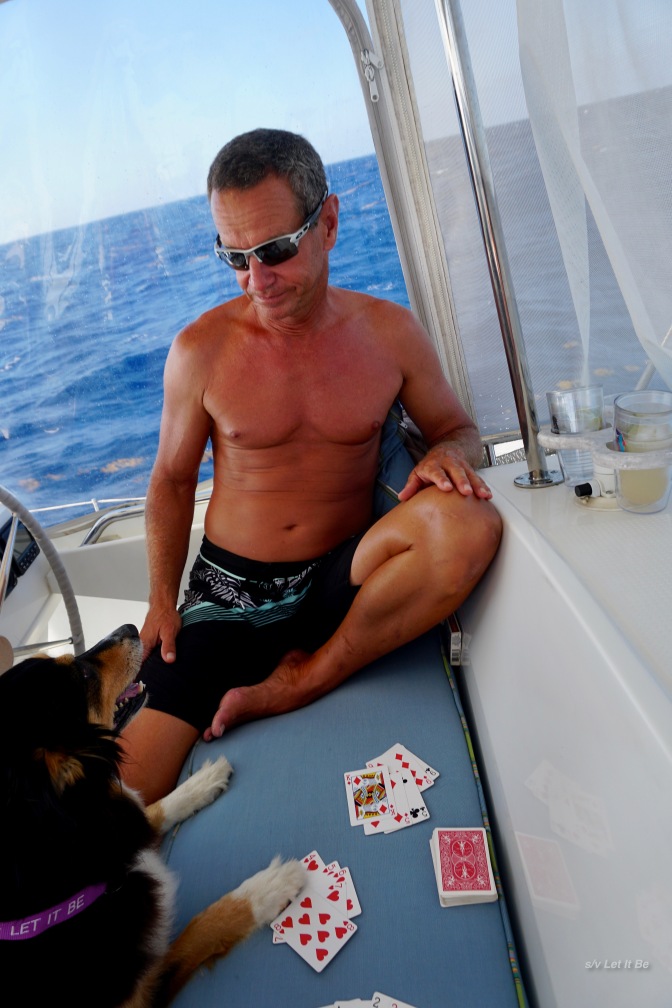 Some afternoons we played cards and this trip we taught Captain how to play five card stud. But she is one lucky dog and Frank and I got really tired of loosing to her! I think it was all beginners luck.

This is a boat, so there are things to be maintained and passages are a good time to tackle things like scrubbing the cushions of our portable chairs.  Fun abounds aboard!

Captain was a champ during our passage.  I really don’t know how she can sleep as much as she does but anytime one of us was downstairs sleeping, she was right there on the floor nearby! When awake, she kept herself busy barking at imaginary things, spotting dolphins and asking for treats. 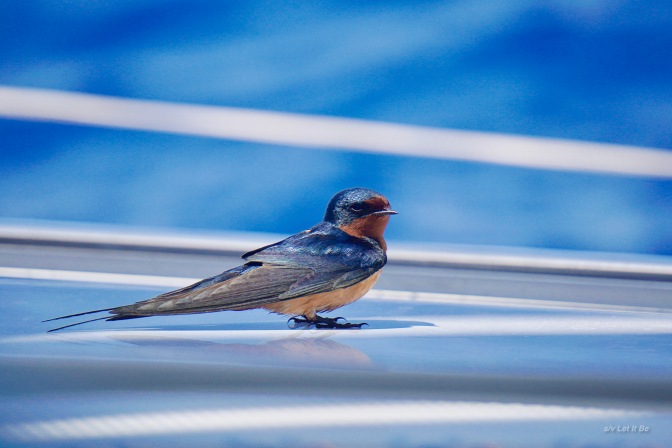 I’m not sure what this swallow was doing so far from land.

This cute little bird came to rest on LIB during our passage. We were glad to offer him a respite from his flight. I cannot imagine how far he had come before resting with us!

So that is the long story of our passage to Belize.  We are very thankful for the safe passage and the great conditions.  And we are grateful for calm anchorages!

Thank you for visiting our blog page. Feel free to add your comments or share our blog. If you want to hear from us more often, check out our FB page.