After Susan and Kevin left us in early April, it was time to leave Placencia and move north through Belize and begin watching for a weather window to make the leap to Galveston, TX.  Originally we planned on stopping at Isla Mujeres, Mexico, but we had heard all kinds of things about the complications of checking into and out of Mexico.  We were only going to have a day or two to visit there, so we decided to skip Isla Mujeres this trip.  Our thought is that we will have a lot of time in Mexico on the western side when we move south from California on the new boat, so our visit would wait.

Anyway, instead of spending two days in Mexico, we decide to stay a bit longer in Belize and see a couple of islands on our way north.  We set out from Placencia and sailed about 29nm to Twin Cayes. We were the last boat to arrive in this beautiful anchorage because we had waited until late in the morning to leave Placencia to make sure a weather system had passed.  Also, we think overnight passages inside the barrier reef of Belize are a bad idea because the charts are poor and there is a lot of shallow water.

Three other boats were anchored in Twin Cayes

Twin Cayes is very well protected and an excellent place to hide from weather as evidenced by one of the boats which had been anchored there for three days before we arrived. There was a pretty decent wind storm predicted along with unruly seas and Twin Cayes was a prefect hiding place.

The next morning we left Twin Cayes and sailed 41nm to Dronwed Cayes. Drowned Cayes is another island of mangrove trees with inlets running through it and no development that we saw.  We meandered through the twisting inlet, closely watching our depth sounder since our charts were unreliable or unmarked, and found a perfect spot to drop anchor.

Cappy was not going to help us get close to the dolphins, so I grabbed her and we swam back to LIB.  Frank continued toward the dolphins, but they quickly swam away.

Although this panoramic picture is a little distorted, it offers a good view of Drowned Caye.

Drowned Caye was perfectly quiet and we felt like we were all alone in an undiscovered land. We pulled out the SUPs and explored some of the narrow fingers of water until they dead ended or exited to the ocean.  What a delightful end to a fairly long day of sailing. The red route to Caye Caulker and the yellow was a very challenging route out of the reef.

The next morning we picked up early and headed toward Caye Caulker. The route we took from Drowned Cayes to Caye Caulker had a several shallow spots and we had to pick and choose our way through the water including a skinny cut at Hicks Caye where we passed two barges coming the opposite direction. I am very thankful that we have a good amount of experience reading the water. It certainly augments chart information and the depth sounder! 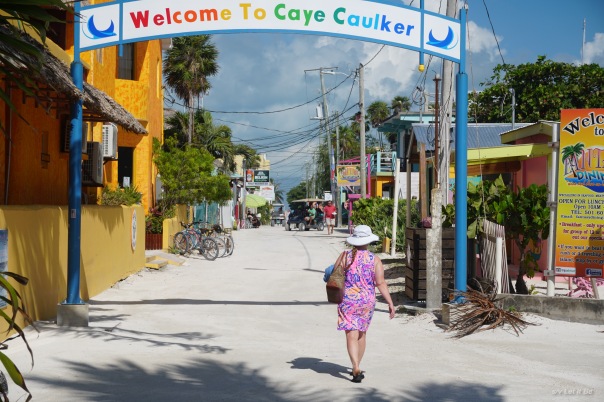 Caye Caulker was absolutely delightful! This was by far our favorite stop in Belize. Although we were watching for a weather window, we enjoyed a week on this pretty and laid back island. Cay Caulker is small, but has a ton of things to offer. Along the dirt streets are plenty of shops and small groceries, restaurants and tour companies. The people were happy and very welcoming! 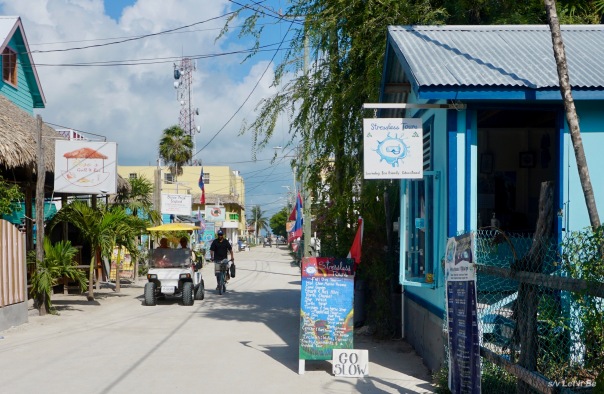 We chose to take a snorkeling tour from Stressless Tours and we had a perfectly amazing day. Everyone we interacted with from Stressless was positive, welcoming and accommodating.  Our day began with a stop to see a seahorse hanging out by a peer, which was great since that brought my seahorse in the wild count up to three.

Our day with Stressless included a stop to swim with manatees, with specific instructions that we were not pester or approach the manatees.

All together we stopped in five places during our tour and got in the water in three of them. Our guides were superb! They jumped in the water with us and pointed out all kinds of coral and fish, teaching about their surroundings and sharing their efforts to protect the reefs and marine life. 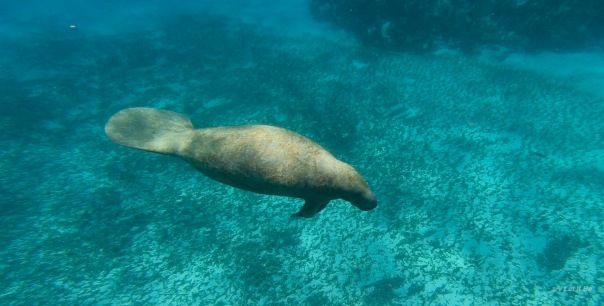 We were extremely impressed with Stressless Tours.  They even asked us to refrain from using sunscreen and they provided a special lotion which is designed with protection of the reefs in mind. It is great to see a forward thinking company like Stressless. 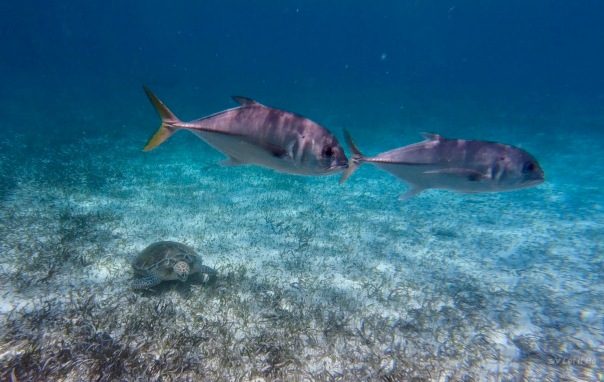 The fish are cool, but I loved that turtle!

Plenty of fish and sharks where another boat was chumming.

Because of the storm system just prior to our arrival at Caye Caulker, there were no other boats in the anchorage when we arrived. But there was plenty (in a positive way) of activity with fishing, snorkeling and diving boats coming in and out of the area.

This boat carrying cinder blocks to a building site motored past us one morning.

We heard that San Pedro, an island right next to Caye Caulker, was a lot like Caye Caulker before it became so populated so we took a 20 minute ferry ride to that neighboring island to see it for ourselves.

It didn’t take long to decide we much preferred the less crowded and slower pace of Caye Caulker to the hectic crowds of San Pedro.  We rented a golf cart and found San Pedro teeming with cars, bikes and golf carts. 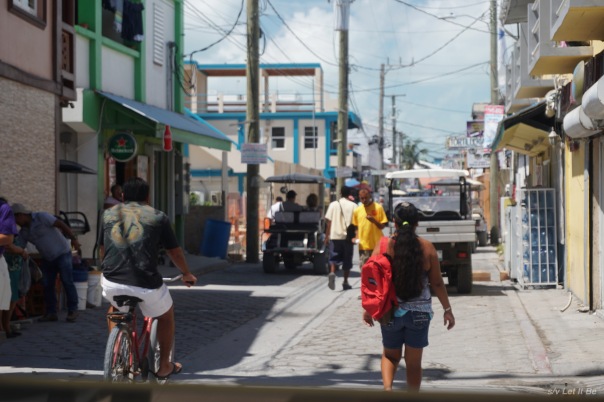 Sorry it’s blurry….no stopping for pics without getting honked at!

We did find a very pretty Catholic Church in San Pedro and we took a minute to look inside and be thankful for the opportunity to explore so many places. 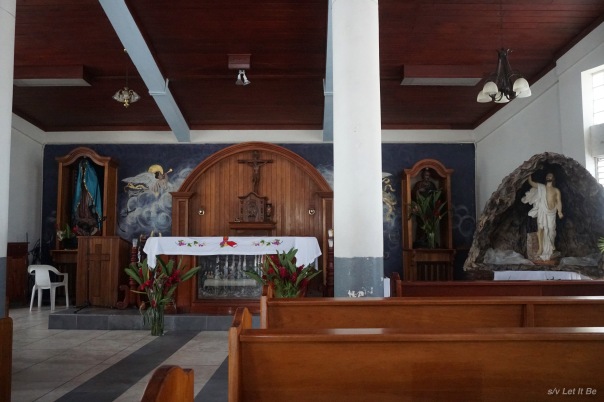 We drove the golf cart from one end of the island to the other and stopped at a poorly attended market where we didn’t find anything we wanted to buy.  But we did chuckle when we found a Boomer Sooner graduate had set up a cafe! Of course we sent a picture to our youngest son who graduated from the University of Oklahoma. 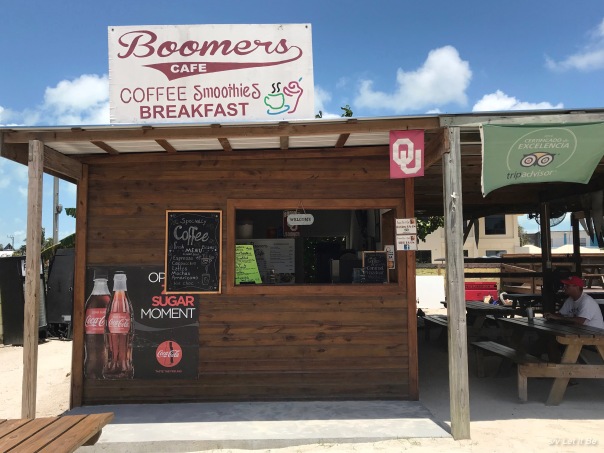 A taste of Oklahoma in Belize!!

Pretty quickly we decided to head back to the ferry dock and return to Caye Caulker where the vibe was slower and more laid back. Since we had to wait an hour or so for the ferry we took refuge at Palapa Bar.  I can definitely see the appeal of this bar where you can order a drink from your inner tube and have it delivered from a bucket on a pulley system! 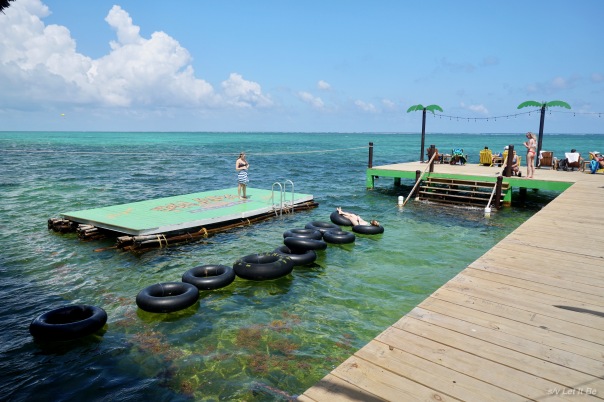 Definitely bring your swim suit if you stop at the Palapa Bar!

Back in Caye Caulker, we decided we should sign up for a dive tour since this would be our last opportunity to dive for quite a while.  We found a very good tour company and signed up for a two tank day. 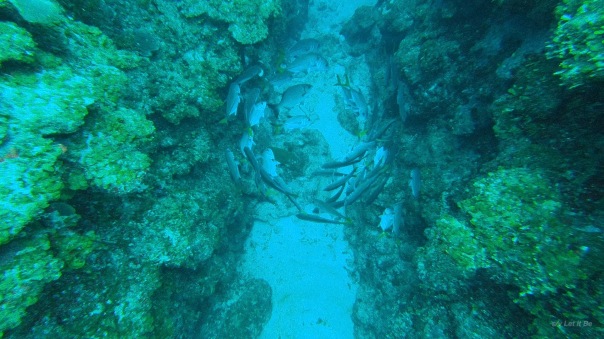 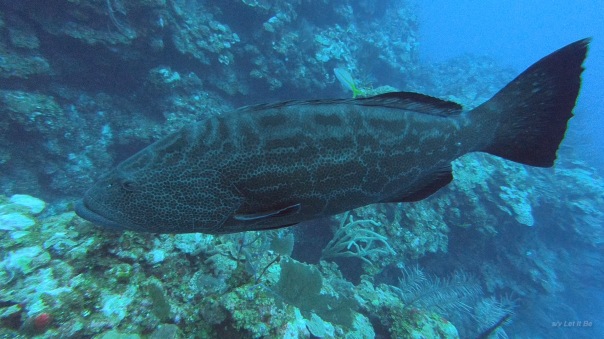 This grouper came right up to me while filming. 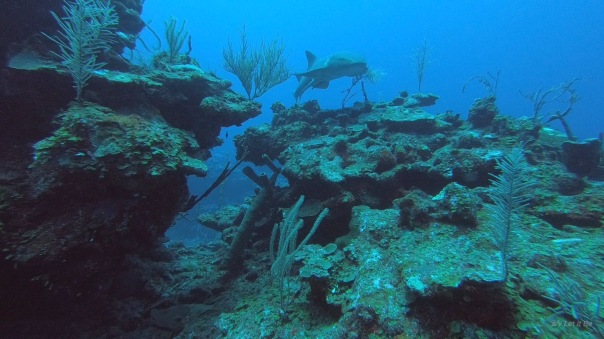 Oh hello! Mr. Shark came swimming right toward me from over this reef. 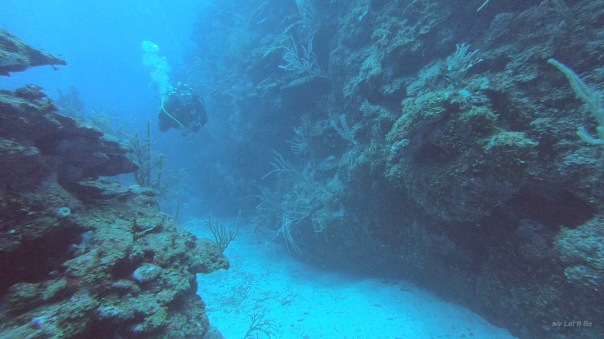 The reef walls created a canyon like feeling underwater. 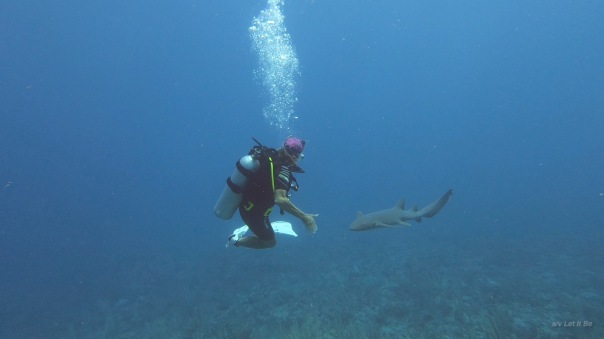 I’m turning to keep this shark in view….no sneaking up behind me, please! 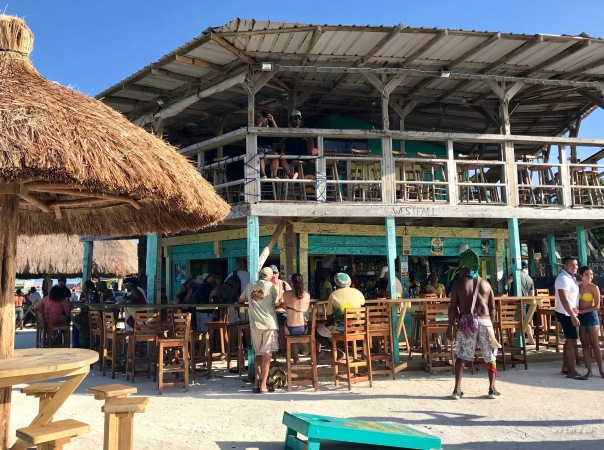 The bar by The Split.

After a day under water, we decided to relax in the sun and hang out at a bar near “the split.” The split is where, in 1961, Hurricane Hattie caused a break in Caye Caulker Island.  The locals use the split to boat to the opposite side of the island and a smart business man opened a bar where folks can hang out.  The split is a perfect place to grab a drink, watch people enjoy the water and check out shallow draft boats going through the channel.

Our time in Caye Caulker was a fabulous way to end our time in Belize. We couldn’t have asked for a more relaxed and comfortable place to prepare for our passage to Texas.  If you have a chance to visit Belize, make sure Caye Caulker is on your list of places to spend a few nights! 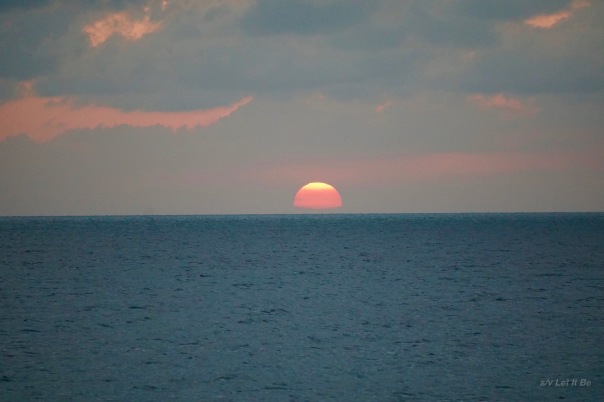 Sunset from the anchorage at Caye Caulker.

Next time I’ll talk about our passage from Caye Caulker to Galveston.  We had a great sail, but we definitely had some interesting times.  And the beginning of our journey getting out of the Belize Barrier Reef was a bit of a challenge!

Thank you for reading our blog.  We appreciate your taking time to share our travels.  Feel free to share your thoughts in the comments.