Wow! Who knew a week could pass so quickly? We had the pleasure of having two couples from our Sail to the Sun Rally come and stay with us on LIB for a week.  And several other boats from the Rally made the effort to come and join us in various anchorages.  The result was a week of fun, laughter and adventures with a pretty large number of people.

Waiting for guests in Staniel Cay.

We sailed LIB to Staniel Cay, where Brad and Terrie of s/v Reflection and Steve and Janine of s/v Second Wind flew into the Exumas.  We had rented a golf cart, so on arrival day the six of us tooled around in a golf cart to explore the island and introduced the newcomers to “island shopping” at the local groceries.  We had already provisioned for the week, but part of the experience of the boat life is poking about in local markets.

The wind was pretty strong so we decided to explore near Staniel for a day or two, but the wind could not intimidate our intrepid Rally friends. Tom and Louise of Blue Lady, Tina and Bill of Our Log and Laurie and Ken of Mauna Kea fought the wind and arrived in Staniel to reunite with our guests. 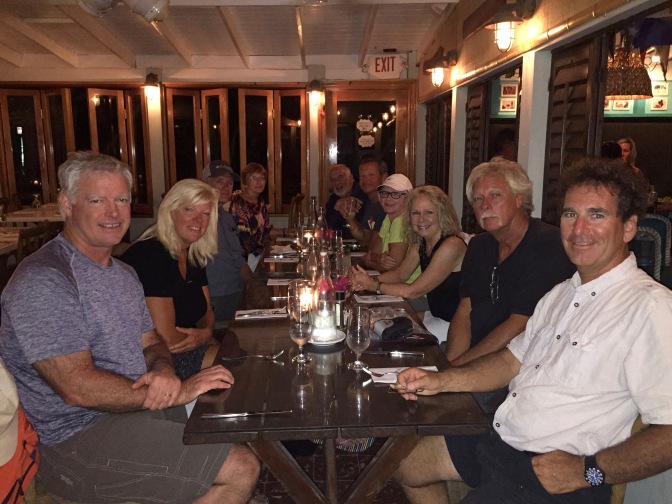 Staniel Cay Yacht Club was our restaurant of choice for our first reunion night. We figured we should go to the Yacht Club since this would probably be one of the only places during the week that had a bar or restaurant. The food was good and the company was even better.

Our days were filled with snorkeling, scuba diving, hiking and general poking around the islands, followed by dinner aboard LIB most nights for whichever Rally boats were nearby. As is usual with boaters, every boat contributed to the dinners so we were not at all burdened with feeding everyone.

Instead of itemizing our itinerary, here are a bunch of pictures from our week.  A special thank you to Tom and Steve and Brad for contributing photographs.  I wasn’t very good about photo documenting so I really appreciate the use of their shots!

Thunder Ball Cave was our first snorkel site right by Staniel.  We enjoyed poking about in the cave, though it was pretty crowded when we first arrived.  Several of the guys were dropped off on one side of the cave and they drift snorkeled through the cave allowing the current to propel them along. 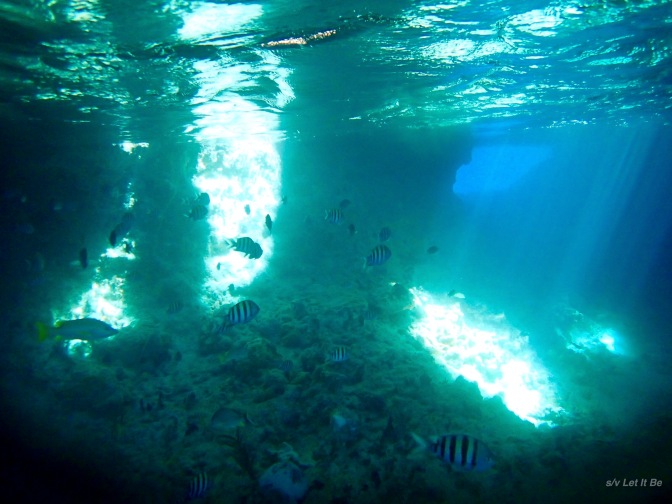 Light from the hole in the cave ceiling pierces the water.

Susan and Kevin, plus Sue’s brother, Brian, of s/v Radiance, made a fast trek north from George Town to meet the group at Compass Cay. Susan and I were adamant that our guests had to experience the Bubbly Bath since we had had such a great time on our previous visit. 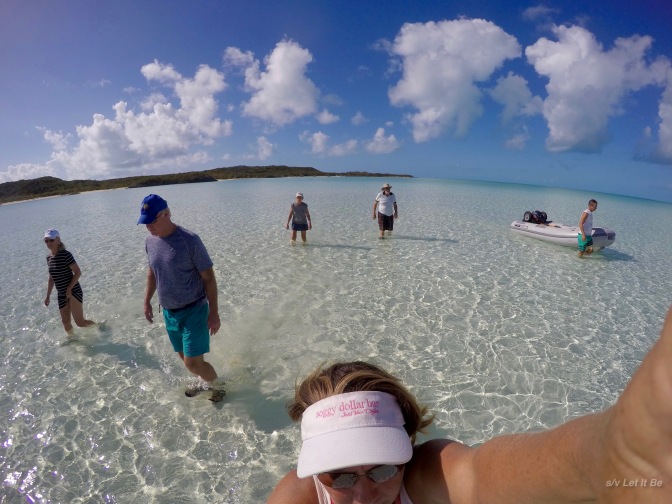 We dinghied to a beach on Compass Cay and walked about half a mile to the Bubbly Bath. As you can see, the scenery and the path were not too strenuous and even if they had been, the effort was worth it to reach the pool.

Thanks for this areal view, Steve.

Steve climbed up the hillside for a look from above and took this picture.  On the left you can see where the water breaches the rocks and feeds the Bubbly Bath.  At the back of the picture, behind where we are standing, is the shallow inlet that we walked across to get to this spot.

Although the weather was not warm, the clarity and color of the water begs for swimming and we obliged often.  We moved LIB over toward O’Brian’s Cay where the Aquarium awaited.

Frank and Brad diving at the Aquarium.

Rather than simply snorkel the Aquarium, Tom, Steve, Brad and Frank pulled out diving gear and dove the site.  I think this was the first time Tom was able to use his new gear and it was the first time in quite a few years that Steve had been for a dive.  It was an excellent place to explore without much current to fight.

The ladies snorkeled the Aquarium and Tom was able to get some great photos from the bottom while he was diving. As you can see, the fish are very friendly!

The picture isn’t great, but the gathering was fun!

While traveling the ICW with our Rally group, I was surprised to learn how many of the ladies did not know how to drive a dinghy or at least were not comfortable starting one.  So one afternoon Terrie, Janine, Louise and I went out in Day Tripper for a driving lesson.  These ladies were excellent drivers and only needed a little confidence boost.  Within an hour all of them were able to start the dinghy, move forward or backwards, get the dinghy on a plain, rescue a fallen object and dock the dinghy….. We all learned some things and now they can confidently get themselves from boat to shore and back again.  This might prove to be a retail boost for local economies!

We had the chance to fly the big red asymetric spinnaker which proved very relaxing. 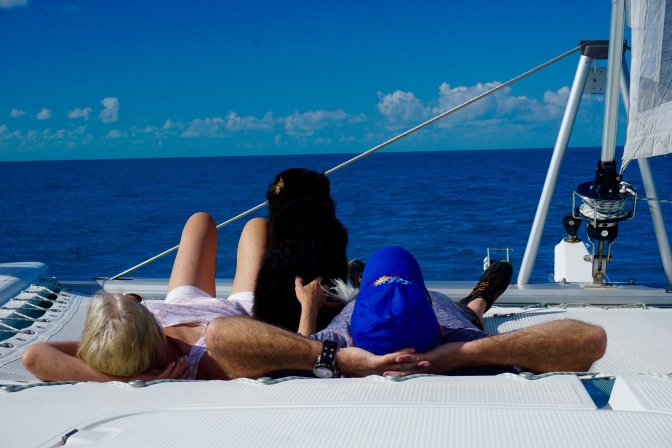 Terrie and Brad found some quiet space on the trampoline but Captain wanted in on it. 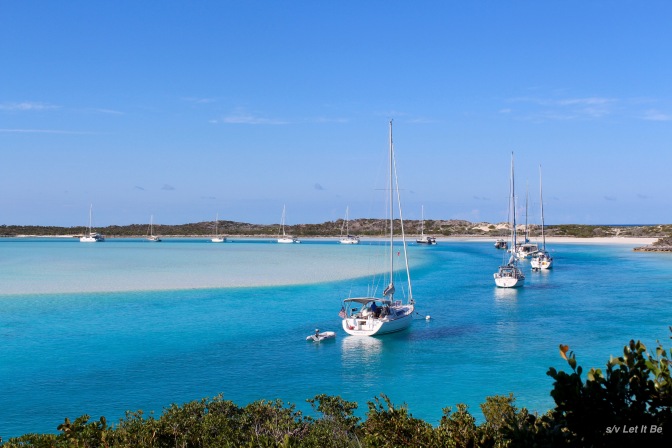 We had to visit the crescent anchorage at Warderick Wells!

The full moon brought a certain magic to the scene.

Spending the week with four guests who are sailors was a first for me.  Because they are all familiar with the limitations and compromises of living on a boat, they were exceptionally easy to have on board.  Additionally, although they own monohulls rather than catamarans, they have more sailing experience than I do and they jumped right into the line work, helming and anchoring.  As a result, I had a pretty leisurely week!

A special thank you to s/v Blue Lady, s/v Mauna Kea, s/v Our Log and s/v Radiance for making the time in your schedules to make the “reunion” happen.  I know Brad, Terrie, Steve and Janine had a much richer experience because you joined us!