← Sail to the Sun Rally Reunion on Let It Be
Conception Island and Rum Cay… The Beautiful Islands of the Far Bahamas. →

Frank caught a beautiful bull Mahi on our way to Emerald Cay Marina.

After our Sail to the Sun Rally friends left from New Providence, Frank and I spent the day provisioning and trying to buy a few things only available from a large city like Nassau.  I had thought the ongoing search for the elusive red filter for my GoPro was completed in Nassau when I bought a very nice red lens cover and GoPro adapter from a dive shop.

However, much to my dismay, the adaptor they sold me does not fit my GoPro 4**, so once again I do not have the correct equipment to get beautiful underwater pictures….. which I find very frustrating!  Not bringing my GoPro into town was a really dumb move on my part and the result is that I have a beautiful red lens just staring at me, waiting to allow me to share fabulous underwater pictures, and I can’t get it to fit my GoPro! 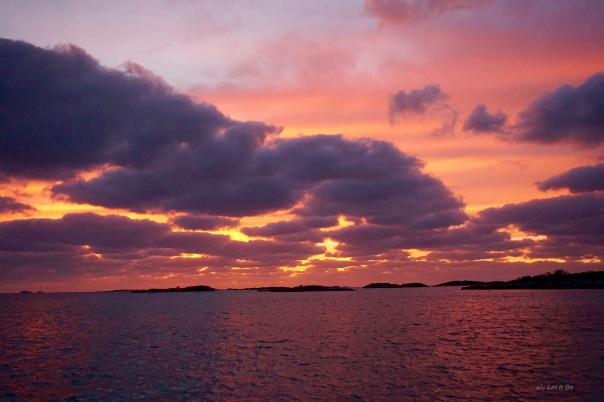 Speaking of big cities, Frank and I spent more than 30 years living in Dallas, Texas which is truly a large city with a population of 1.258 million as of 2013.  It is a very different experience here in the Bahamas when we visit various Islands and find them sparsely populated yet boasting of many “towns.”

Our visit to Long Island really drove home how incredibly different this new lifestyle is for us.

Physically, Long Island is large island by Bahamian standards. It is approximately 80 miles long and the width ranges from 3/4 of a mile to 4 miles, for a total of 230 square miles; yet Long Island has a total population of only 3,094 as of 2010!  The people who live here do not gather into small cities, but are spread among many small villages usually where their ancestors settled long ago.  Even well known towns have very few residents, like Clarence Town, the capital, which boasts a population of only 86 folks! 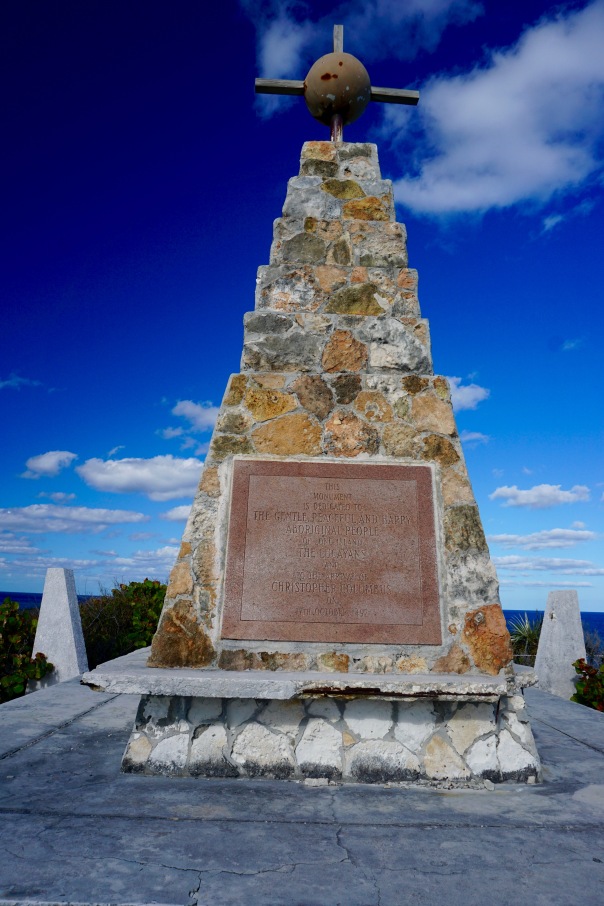 A modest monument to Columbus.

Long Island was originally called Yuma by the indians who settled there and later was named Fernandina by Christopher Columbus.  After the American Revolution, many Americans from the Carolinas moved to Long Island and tried to recreate their plantations but the cotton crops didn’t last long and only ruins of those homes remain.  Today farming is still important on Long Island but the planting is “pot farming.”  My understanding is that soil accumulates in holes in the limestone and it is in these holes that most planting is done.  I admire the tenacity of these people and how well they use the resources of their island.

Regardless of the relatively small population, Long Island has a lot to offer, so Laurie and Ken of s/v Mauna Kea and ourselves, rented a car and set out to explore. Car rentals are on a 24 hour basis and we could pick up the car at any time.  We decide to begin our tour at noon and explore the south part of Long Island one day and the north part the next.

Our first stop was right on the road where a local man is in the process of building his sailboat in preparation for the upcoming Long Island Regatta.  This regatta is raced by locals who make and sail their Bahamian Sloops.

As soon as we stepped out of the car and began looking at the boat, two residents came over to chat and tell us all about the boat.  Apparently their son is building this boat and has been working on it for two weeks.  We were amazed by how much he had accomplished in so little time!  He must work quickly though as the race is the end of May!

The pool and buildings at Flying Fish Marina are great.

Our next stop was Clarence Town, population 86.  There is a very large marina in Clarence Town called Flying Fish.  Flying Fish Marina was completely renovated and reopened in October 2016 after damage from hurricane Joaquin. 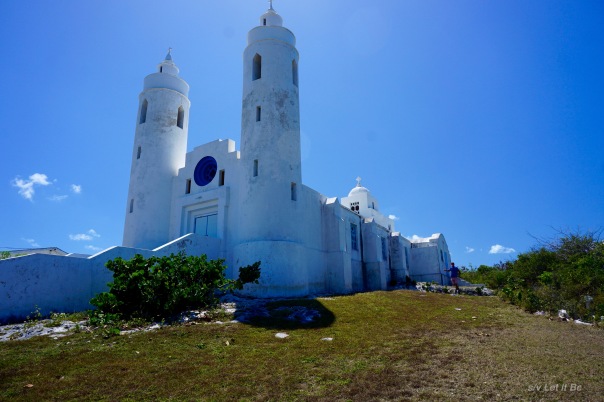 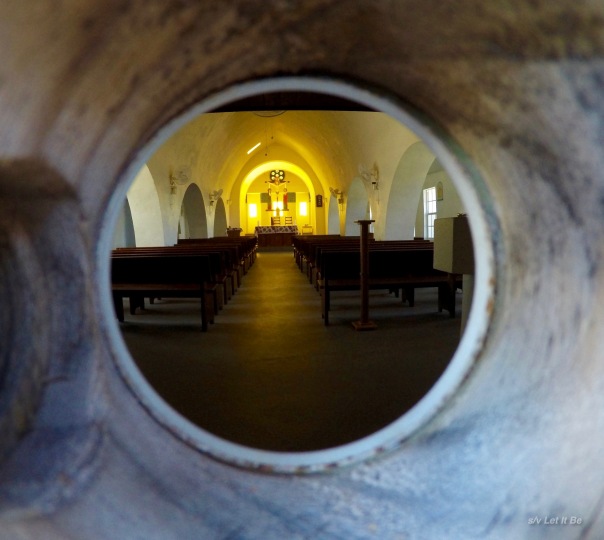 The church was locked, but my GoPro rendered a nice pic through the keyhole!

The Spanish influence is visible in the beautiful arches.

Perhaps the most beautiful stop during our exploration of the southern side of Long was Dean’s Blue Hole.  This hole, where the world free diving competition is held, is said to be 660 feet deep with a cavern that extends 4,000 feet laterally once you get to the bottom.

Dean’s Blue Hole from above.

Yeah, we don’t have any pictures of the 4,000 foot cavern!! But here is a stunning view from above. 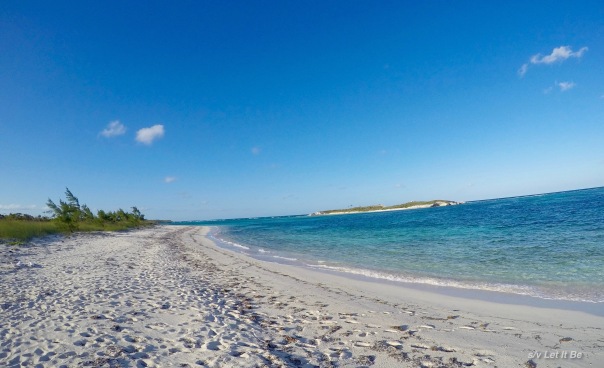 A protected bay, perfect for kiting.

Guana Cay was another pretty stop and Frank was quick to observe the kiting potential of this bay.  For you kiters, Frank definitely kept his eye on the wind and later in the week managed to get in a bit of kiting here.

Long Island has many caves that were once used by ancient residents as dwellings or places to hide during hurricanes.  We sought out Leonard, an older gentleman whose family has owned Hamilton Cave for many generations, to give us a guided tour.  Leonard had many stories about the history of the cave and pointed out five different types of bats that live there…. Laurie and I were NOT thrilled when some of those bats swooped down toward our heads!

Sunset was approaching so we turned toward Chez Pierre, a well known restaurant on Long Island. Like every place we visited off of the main road, Chez Pierre was found down a long, rocky, pot-holed road that meandered several miles without any signage to reassure first time visitors.  We did manage to find Chez Pierre and had a fabulous Italian meal?? Yep, Italian at Chez Pierre!

The picture isn’t great but the food was!

Pierre was the waiter, chef and check out person, so he was a busy man.  The bar was self serve and on the honor system which was unique and fun.  We highly recommend Chez Pierre if ever you visit Long Island.

Farmers Market is open every Saturday from 8 am to noon.  We arrived at 8:30 but already most of the produce was gone.

Straw and sisal work is common on most islands in the Bahamas.  You will find straw markets and stands in front of homes where locals sell everything from purses to placemats to hats and baskets.

Sarah, at the Farmer’s Market, had a wonderful display of items and she had a poster of the various plaits available.  This is the first time I was able to see all the weaves used and I found it interesting.

The boating community at Thompson Bay, Long Island has to be one of the finest I have encountered.  The boaters and the Long Islanders have developed a wonderful relationship in which both recognize the positive skills each brings.  The people of Long Island are kind and welcoming and clearly enjoy the boating community.  The boaters are very aware of the needs of the islanders and contribute tangibly to those needs.

Most recently, there was a push to bring trees to Long Island to donate to the islanders.  After hurricane Joaquin, boaters brought much needed supplies and food to Long Island and helped rebuild many damaged buildings.  In fact, the day before we arrived, a group of boaters volunteered and replaced the roof on a home.

The relationship between the boaters and islanders seems unique and wonderful to me.  I can certainly understand why so many sailors return to the area every year.  This is the first time I have seen island life and boat life completely intertwined and it was truly beautiful to see.

Lest you think we are neglecting Captain, let me assure you that she goes with us on most of our escapades.  Here she is enjoying the pool and view at Latitudes on Great Exuma Island.

← Sail to the Sun Rally Reunion on Let It Be
Conception Island and Rum Cay… The Beautiful Islands of the Far Bahamas. →