After several weeks anchored in Kaneohe Bay, waiting for quarantine to finish and some sail maintenance to be completed, we were invited to visit at the Kaneohe Yacht Club.

What a delightful change to be docked at this yacht club.  While the Bay is nice, we were almost the only people living on a boat and we had very little interaction with others. Plus the Bay is large and has some considerable fetch so relaxing in very calm water at the Yacht Club is appreciated.

Mae and Tommy chillin’ on TTR.

Tommy and Mae came by in Tommy’s fishing boat while we were anchored in the Bay and we have very much enjoyed getting to know these young people. They have told us about some local places to visit, sailed with us, helped with some rudder work and offered to take us out on their whaler.

KYC has a very active junior sailing program. We see the youngsters heading out on a variety of sailboats that range from tiny Toppers and O’Pen Bics all the way up to Waspz.  The kids tack up the harbor right past the bow of TTR with coaches following behind offering instructions.

A Waspz out in Kaneohe Bay.

COVID-19 put the kabosh on casual beer can races at the KYC until a few weeks ago but now they are back in full swing with a few modifications.  Crew numbers are limited and instead of starting the race from the bulk-head, the boats take off from their slips and head to the starting line for each appointed class start. 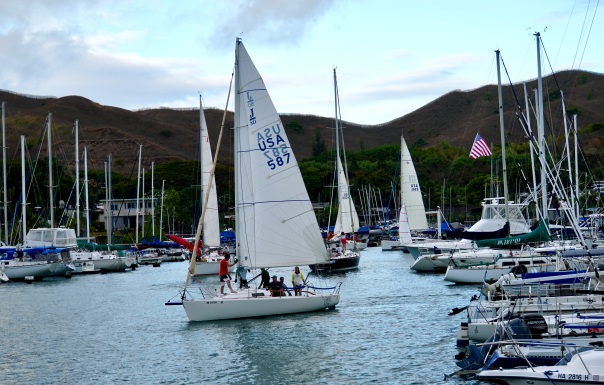 Racers jockeying for position before the race start.

As  you can see, the fairway gets pretty tight with all the race boats setting up and bearing off to cross the start line on time. TTR is on the end dock and very close to the rolling start line which is also the finish line. 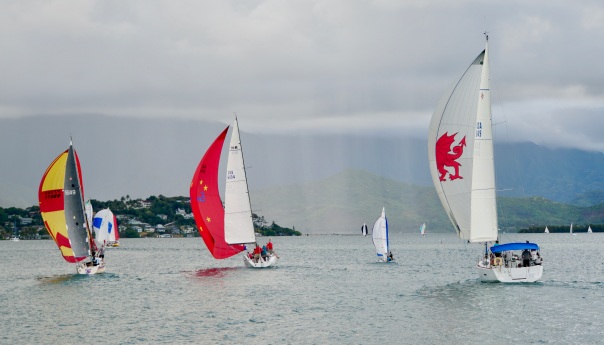 Spinnakers are deployed before the start line. 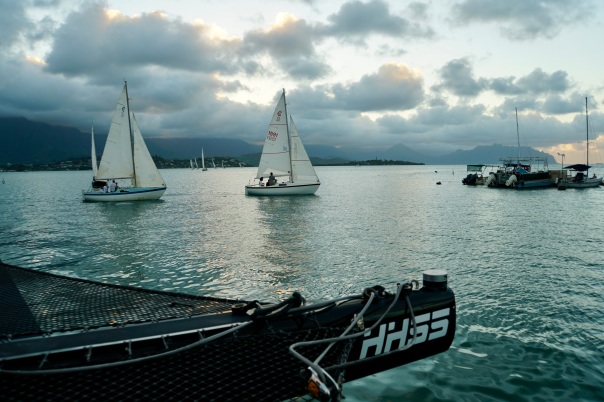 Tacking back to slips just past the finish line.

The folks at the Kaneohe Yacht Club have been incredibly friendly and welcoming! We have met so many people that the names are beginning to run together but the overall feeling of kindness and acceptance has been universal.

Last Thursday we had a few folks over to watch the races and share some “pupus” which is what Hawaiians call bite size appetizers. Drinks and conversation flowed freely but we kept a close eye out for the returning race boats. 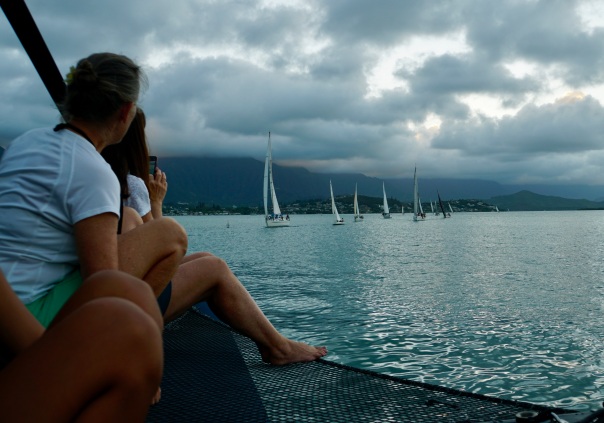 Looking to see which of their friends is first this week! 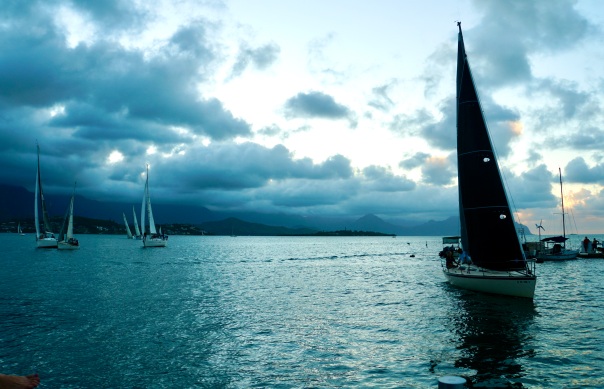 Dancing toward the fairway.

Lori invited us to join her and Tony for a walk along the Ulupaina Trail.  While the trail was slightly less than four miles, it was often quite steep and the footing was a variety of roots, rocks and pine needles strewn with the spiked round balls of sweet gum trees.

Frank, Tony and Lori paused for a photo in the shade.

The sweet gum balls hidden in the pine needles made the footing a challenge but the majority of the trail was shaded and we had some really nice views.

This would be a perfect reading spot; shady with a lot of birdsong.

In addition to meeting sailors, watching races and taking hikes, I had the opportunity to play tennis twice while at KYC. I admit, my racket was dusty and my strokes quite rusty, but it was really fun to whack a few tennis balls around the court. I am certainly not ready for or in shape for Dallas tennis leagues, but the tennis here was very casual and no one seemed to care about the inconsistency of my shots. I hope it isn’t another five years before I play again!

Our time here at KYC is just about finished which is too bad because we already feel like we ‘belong.’  We truly appreciate the warm welcome here, the opportunity to meet the Kaneohe Yacht Club members and enjoy the ambiance of the club.

A special thank you to Ike for finding a spot for TTR at the yacht club and to Noodle (Bill) and Lori for taking us under their wing and introducing us to so many people!

Thanks for stopping to read our this quick update about what we are doing in Hawaii. We hope you and your family are healthy and well in these unusual times.