After a couple of weeks in Honolua Bay, we decided to change locations on Maui. First we stopped at Mala Wharf but the north winds made the anchorage pretty bumpy. So after just two nights, we moved to Olowalu which is a few miles south of Lahaina.

Mala Wharf anchorage is quite pretty.

The water in Olowalu is beautiful and we dropped anchor in a large sandy area for excellent holding.  However, we noticed the wind was shifting throughout the day and we were concerned the anchor chain could become fouled in rocks or worse damage coral. While we were swimming we had located a mooring ball nearby, so we decided to up anchor and tie to the mooring ball instead .

We had quite a time of moving just a few feet away as the wind shifted direction and velocity incredibly fast in Olowalu. When we upped anchor, the winds were about 10 knots. However as we were maneuvering and tying up to the mooring ball, the wind significantly changed directions twice and I saw the wind speed vary between 12 and 30 knots!

TTR has a decent amount of windage, but thankfully with two engines we are able to control her well. Soon we were securely tied to the mooring ball and we celebrated our successful mooring and coral saving maneuver with sundown cocktails.

The next day we decided to take a short walk in search of the petroglyphs reported to be near Olowalu.  Frank and I have a history of very little luck finding cave paintings in a variety of locations.  While in the Sea of Cortez, we took a dinghy trip and a loooong walk looking for cave paintings near Bahia de Conception.  We spent a good two hours traveling to and searching for the caves without any success.

So when Frank suggested we head off in search of the Olowalu petroglyphs, I was a bit skeptical. But hey, it has been forever since we have had a walkabout so I was in.

Here are a few pictures from our walk.

Once we were on this old road, traffic noise receded and bird song could be heard.

After a quick quarter mile walk from the beach, we turned onto this old road and walked about half a mile before we were side tracked by a beautiful spring. 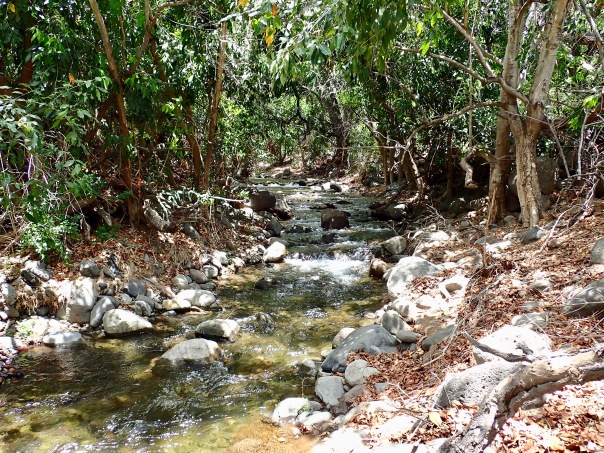 The fresh water was clear and cool.

We couldn’t resist sitting here for a few minutes to watch the water flow and listen to the birds twittering and fluttering nearby. Before long though we continued our search for the drawings.

Happily, we quickly found the old, out of commission pump house which is the marker for the beginning of the petroglyphs.

Clearly that old pump house is out of use.

According to the information we read, the images we saw are known as Ki’i Pohaku which means “rock pictures or images.”  The Ki’i Pohaku date back 200-300 years to an era which was referred to as “pre-contact” Hawaii.  I thought the drawings would be older than they are but without any protection from the elements they could be erased in time so I guess “younger” is better in this instance. 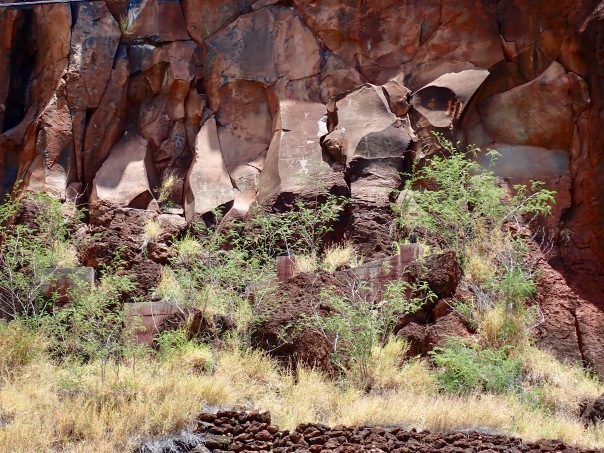 A portion of the smooth wall where the petroglyphs are located.

The guide we read suggested bringing binoculars and that was well worth the effort.  We sat in the shade and spied all kinds of drawings – people, families, a sailing vessel, a dog, etc. 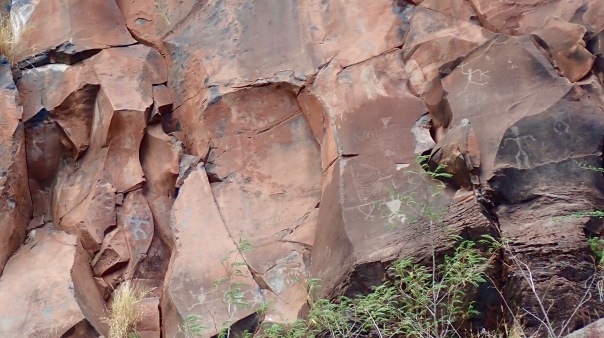 Can you find the sailboat?

The theory is that this area was along a trail between Ioa Valley and Olowalu Valley and that travelers would rest in the shelter of this rock wall.  I can almost imagine some mom telling her child to stop drawing and come on along. 😉  However the drawings are chiseled into the rock so I imagine adults made these depictions. 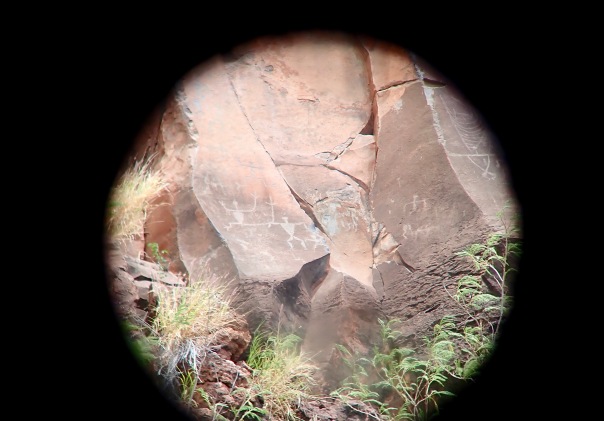 Here is a photo take through the binoculars.

It is kind of interesting how similar looking cave drawings are from different areas of the world. Those we have seen all tend to have triangular upper bodies and stick-like arms and legs. It is probably challenging to make even a crude drawing into rock using hand tools.

The temperatures have been great in Maui and it was a perfect day for stretching our legs and seeing tiny bits of land  but pretty soon we strolled back to Ticket to Ride. 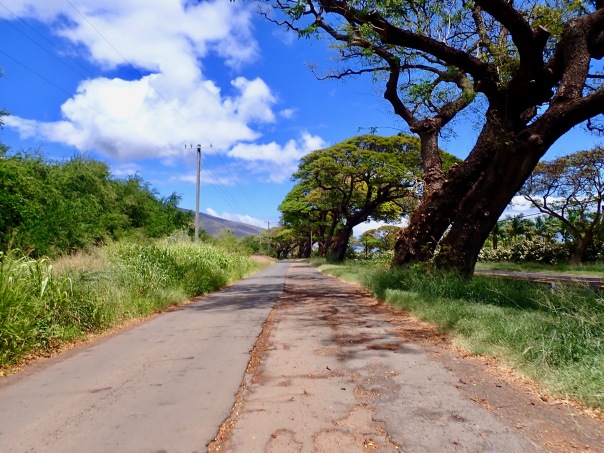 The little used, older road along the coast.

Maui is so lush that even walking along the old road adjacent to the new, well traveled road is quite pretty with huge trees and flowers.

TTR bobbing in those gorgeous waters.

Every time I return to an anchorage where we left TTR, I am happy to see her floating there, waiting to welcome us home.

Thanks for stopping in to read this post. Hopefully we will have the opportunity to explore other areas and share that with you. Wishing you all health and comfort during these trying times.